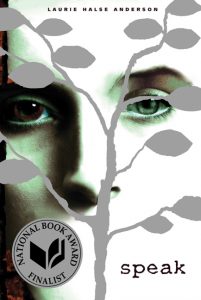 Macmillan to Match Up to $15,000 in Donations to RAINN

In celebration of the 15th anniversary of the publication of Laurie Halse Anderson’s groundbreaking Speak, Macmillan will be matching donations of up to $15,000 to the Rape And Incest National Network (RAINN) throughout the month of April, Sexual Assault Awareness Month.

Speak, a young adult novel about a girl dealing with the aftermath of sexual assault, has sold over 2.5 million copies and has received immense praise and accolades; among them include being named a Publishers Weekly Best Book of the Year, a School Library Journal Best Book of the Year, a National Book Awards Finalist, and a Michael L Printz Honor Book.

“Since its publication in 1999, Speak has empowered countless survivors of rape and sexual assault to come forward and ask for help,” said Joy Peskin, Editorial Director of FSG Books for Young Readers. “And where does one turn for such help? To RAINN. So a partnership between the two is completely natural.”

Named one of America’s 100 Best Charities by Worth magazine, RAINN is the nation’s largest anti-sexual violence organization. In addition to creating and operating the National Sexual Assault Hotline in partnership with more than 1,100 local rape crisis centers across the country and operating the DoD Safe Helpline for the Department of Defense, RAINN also carries out programs to prevent sexual violence, help victims and ensure that perpetrators are brought to justice.

This will be the second year in a row that Macmillan will participate in a campaign, nicknamed Speak4RAINN15. In April 2013, Macmillan set- and reached- a goal of $10,000 in matching donations to RAINN in honor of Speak.

Macmillan will offer a variety of tiered incentives for donation, including signed books, author visits, and inclusion of the donor’s image in the forthcoming Speak graphic novel, tentatively schedule to be published in Fall 2015.

For more information or to make a donation, please visit http://www.rainn.org/speak.

NOTE TO THE PRESS:

RAINN (Rape, Abuse & Incest National Network) is the nation’s largest anti-sexual violence organization and was named one of “America’s 100 Best Charities” by Worth magazine. RAINN created and operates the National Sexual Assault Hotline (800.656.HOPE and online.rainn.org) in partnership with more than 1,100 local rape crisis centers across the country and operates the DoD Safe Helpline for the Department of Defense. The hotlines have helped more than 1.9 million people since 1994. RAINN also carries out programs to prevent sexual violence, help victims and ensure that rapists are brought to justice. For more information about RAINN, please visit rainn.org.