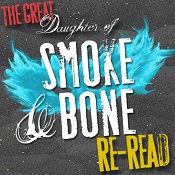 “Other digital and social media components of the promotion include Facebook and Tumblr book giveaways, and a Daughter of Smoke & Bone Tumblr site showcasing fan-art as well as an interactive walking tour map highlighting sites in Prague that appear in the novels. The artwork is also shared via other Little, Brown Books for Young Readers social media networks, including the dedicated Facebook page for the series, which has garnered more than 26,000 ‘likes.'”