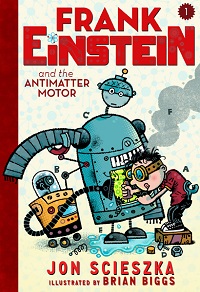 Brian Biggs, a seasoned children’s books illustrator, created the artwork. Amulet Books, an imprint of ABRAMS, will release the first book on August 26, 2014. Future installments will focus on topics that include geology, astronomy, and energy.

“The author has been re-reading works by some of his favorite scientific thinkers, including physicist Richard Feynman, who is the basis for Frank Einstein’s Grampa Al. He also keeps a bulletin board of intriguing science stories, such as the recently discovered immortal jellyfish, and tales of how some everyday things – cornflakes, bubble gum –were invented.”