E-Book Rising: The Changing Market in Children’s and YA Books 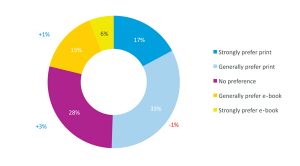 2013’s numbers reflect a predictable sales dip on the heels of the success of The Hunger Games in 2012. The popularity of the series on e-books is also indicative of the increasing use of devices among teens.

“The Nielsen research shows that teen readers who prefer to read e-books rose to 21% in the fall of 2013 compared to 19% in the fall of 2012. While most teens said they still would rather read print books, the increased interest in e-books, combined with the fact that more than 40% of teens already own or plan to buy an iPad, Kindle Fire, iPad Mini, iPhone, or iTouch, suggests that children’s e-book sales are certain to steadily rise.”