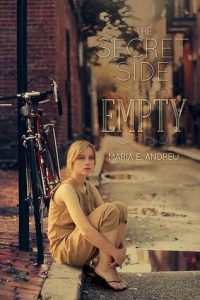 Maria E. Andreu’s debut novel, The Secret Side of Empty (Running Press Kids, March 2014), offers an honest, authentic portrait of an undocumented high school senior who carefully hides her circumstances even from her closest friends, and cannot apply for college despite her near-perfect grades. Even before publication, the novel received glowing reviews and accolades, including a spot on the Junior Library Guild’s spring 2014 list. In this interview for CBC Diversity, Andreu talks about her own life as an undocumented immigrant and how things have or haven’t changed for these bright, promising young people who live in the shadows.

You have stated publicly that much of M.T.’s story is based on your own experience as an undocumented immigrant from Spain in the 1970s and 1980s. What are some of the specific parallels between your own story and that of your protagonist?

I like to say that the facts are all different but the feelings are the same.  I felt the same isolation and hopelessness that M.T. feels.  I didn’t know how I would go to college. I felt the economic disadvantage. But I was a teenager during the 1980s so of course I didn’t connect with my high school boyfriend on Facebook and didn’t have a cell phone. I felt it was important to make M.T. a modern teen so that readers today wouldn’t get bogged down in the 80s references. But the experience is genuine, if fictional. And, fun side note, the post-it scene and the “slow speed chase” both really did happen.

M.T. often refers to herself as an “illegal.” Advocates for better conditions for undocumented immigrants and a path to citizenship tend not to use that word, arguing that “no human being is illegal.” Why does your first person narrator choose to use a term that many consider politically incorrect or insensitive?

I cringed using it. As an adult I’ve gotten involved in the social justice community and have worked with migrant workers, so I know that “illegal” is an awful word. (I happen to own a t-shirt that says, “No human being is illegal”). But the truth about M.T. is that she is deeply ashamed of herself. Like a lot of young people, she can’t see the external forces at work in her life. She feels responsible, different, stained somehow. Also, she’s pretty uninformed about the whole political side of her situation. Instead of reaching out and organizing like so many brave undocumented people do today, she isolates herself. So “illegal” is the word she’d use. It’s the word I believed about myself until I learned better.

People immigrate to the United States for a variety of reasons, and the circumstances that drove M.T.’s family are complex—on the surface economic, but there’s more to it. Can you talk more about this, and how it affects M.T. and her family’s life now that they are in the United States?

I didn’t want to take the easy road and make her parents’ migration some black and white heroic escape from tyranny. I think that’s the reason a lot of people come to the U.S., but it’s not the only one. I wanted it to be more complicated than that. If her parents had been escaping abject poverty or political persecution I was concerned that readers would be hesitant to examine their motives and choices. For me, that would have turned it too much into a “victim” story.

Her parents came here by choice but couldn’t have foreseen what that choice would mean. I think that’s an important look at the immigrant experience. M.T.’s parents, and her dad in particular, are at that point in their lives in which they’re wondering what it all means. They left behind loved ones and everything familiar to take this chance in a new country. Their hope was to make it big. That hasn’t worked out and so they’re stuck. I think her dad’s method of coping is to blame this country. It creates a tremendous rift between him and M.T. because he fails to understand that their opinions about the U.S. are fundamentally different. And she doesn’t really understand her parents’ struggles either. They’re experiencing the same reality in ways that pit them against each other.

Why did you choose Argentina as your protagonist’s country of origin, and what kind of research did you do to learn about that country’s situation and that of its migrants to the United States?

My own background is more complicated than just “Spaniard.” It’s kind of tough to explain to people, so I made M.T.’s story easier. My parents were born in Spain and emigrated to Argentina as toddlers. They met and married in Argentina. When I was going to be born, they moved to Spain briefly, so it was kind of a fluke that I was born there. They speak Spanish with an Argentinian accent, as do I. But my passport (before I got my fabulous American one thanks to the 1986 amnesty) was from Spain. Their whole immediate family—brothers, sisters, cousins—are all in Argentina. Then they emigrated to the U.S. when I was an infant. The plan was to work for six months, save up money and go home to Argentina. And… well, life had other plans.

Author Note: As you can see, it’s a story that bogs you down a bit, so I made M.T.’s background simpler. In some ways, M.T.’s family’s country of origin matters less than the fact that they feel the strong pull of another place. But I do know about the struggles of my own family, both those of us who stayed here and those of us who remained in Argentina. And I’ve visited Argentina as an adult as well. I used those memories to build certain details, like the description of the dance at the town square and other stories M.T. hears.

Maria E. Andreu is the author of the novel The Secret Side of Empty. She draws on her own experiences as an undocumented teen to give a glimpse into the fear, frustration and, ultimately, the strength that comes from being “illegal” in your own home. Now a citizen thanks to legislation in the 1980s, Maria resides in a New York City suburb with all her “two’s”: her two children, two dogs and two cats. She speaks on the subject of immigration and its effect on individuals, especially children. When not writing or speaking, you can find her babying her iris garden and reading post apocalyptic fiction. Read more at http://mariaeandreu.com.