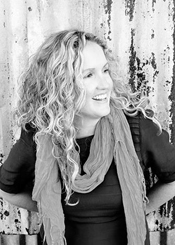 NEW YORK, NY – Simon & Schuster Books for Young Readers announced today that it will publish a new young adult novel written by Becca Fitzpatrick, the New York Times bestselling author of the Hush, Hush Saga, which has more than 2 million books in print. Fitzpatrick’s new standalone thriller, SAPPHIRE SKIES, will be published in Fall 2015 and be supported by a major marketing campaign and author tour.

In SAPPHIRE SKIES, seventeen-year-old Stella Gordon lives with her mother in a lovely country manor near Philadelphia’s “old money” Main Line. But one fateful night, Stella’s life is shattered by a single gunshot. Stella witnesses a crime, forcing her into the U.S. Federal Witness Protection Program to testify against the perpetrator—a crime boss named Danny Bolando. Stella is whisked away to the sleepy town of Thunder Basin, Nebraska, and forced to start life over as someone else. She soon meets Chet Falconer, her boyishly handsome ranch hand neighbor, who swears he’s going to have her wearing cowgirl boots and riding horses before the summer’s over. While Chet’s flirting is a welcome distraction from her miserable plight, Stella is most certainly not into cowboys, and she lets him know it. But deep down, and against her better judgment, Stella can’t help but feel she’s falling under Chet’s spell. Unfortunately, she also has to deal with Dusty Falconer, Chet’s hotheaded and rule-breaking younger brother whom Stella feels an unwanted but irresistible attraction to. As the hot Nebraskan summer wears on, Stella tries to settle into her new life. But when she receives a threatening message on her doorstep, she fears she might never outrun her past. Is it possible she’s not as safe in small town Nebraska as the authorities would have her believe?

“If I had to choose one word to describe SAPPHIRE SKIES, it would be: thrilling,” says executive editor Zareen Jaffery. “From the beautifully complicated romance to the suspenseful plot, Becca has created a novel that will have readers furiously turning pages.”

Becca Fitzpatrick adds, “I’m delighted to be writing another young adult thriller for Simon & Schuster—this about a girl who’s running from dangerous men and a haunted past. I’m drawn to stories that weave heart-stopping suspense with broiling romance, and SAPPHIRE SKIES is no exception.”

Becca Fitzpatrick’s debut novel Hush, Hush was originally published in the fall of 2009, and it was an instant New York Times bestseller. The subsequent books in the Hush, Hush Saga series, Crescendo, Silence, and Finale were USA Today as well as New York Times bestsellers. Fitzpatrick’s next book, the psychological thriller Black Ice, will publish on October 10, 2014.