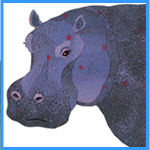 Steve Jenkins has written and illustrated more than 30 nonfiction picture books about the natural world, many of them with his co-author and wife Robin Page. Steve’s books represent the intersection of his career as a graphic designer and illustrator, his life-long interest in science, and his love of books.

To learn more about Steve and his books, visit stevejenkinsbooks.com.