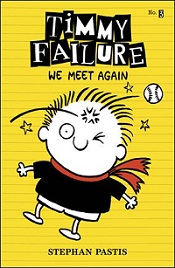 SOMERVILLE, MA – The title character in Stephan Pastis’ hugely popular middle grade series will continue his push for global detective agency domination this year. Candlewick Press is officially revealing the title and cover art for the third book in the series,Timmy Failure: We Meet Again, to be published globally the last week of October 2014 with an announced first printing of 350,000 copies.

The first book, Timmy Failure: Mistakes Were Made, which released in February 2013, has spent over 20 weeks on the New York Timesbestseller list in the U.S., was #1 on the American Booksellers Association Indie Next List, as well as an Amazon Best Book of the Month selection.  Rights have been sold by Writers House in 30 countries to date.

The second book, Timmy Failure: Now Look What You’ve Done is slated for publication on February 25, 2014, and will be supported by an extensive consumer marketing campaign and author tour. About the second installment Booklist jokingly declared, “Timmy Failure, would-be supersleuth and self-anointed smartest person in the world, is back, and he has learned absolutely nothing from his previous adventure.”

“It has been so much fun for me to write the Timmy books, and it’s exciting to know that we will be releasing not one, but two new books this year,” said author/illustrator Stephan Pastis. “It will be thrilling to go on tour this winter and tell kids that they won’t have to wait long for more Timmy (mis)adventures.”

ABOUT THE AUTHOR
Stephan Pastis took an unusual route to becoming a number-one best-selling comics creator: he went to law school. It’s not that he didn’t want to become a cartoonist – as a child growing up in the Los Angeles suburb of San Marino; he spent many happy hours off by himself drawing. He was routinely called on to create cartoons for his school newspapers. But by the time he graduated from the University of California at Berkeley with a degree in political science, Pastis—a completely self-taught artist—felt it unlikely that his cartoons would ever be syndicated.

So he found himself sitting in class at UCLA Law School, hopelessly bored, sketching the character Rat (who would later become a mainstay of all his future comic strips). Creative inspiration followed him through graduation to his first law firm job in San Francisco, where by 1996 he finally started submitting his comics to syndicates. Persisting through an initial spate of rejections, Pastis created his signature strip “Pearls Before Swine” and eventually signed on with his syndicate in 1999. Pearls was off and running, now syndicated in over 700 newspapers, and making appearances on the web and in many best-selling books.

In 2013, inspired to break out of the box of a daily comic strip, Pastis took on the new challenge of becoming a children’s book author, penning the first book in a middle grade series called Timmy Failure, about an inept kid detective and his sidekick polar bear. Fail it did not; receiving stellar reviews and becoming an instant New York Times and National Indie bestseller. Now published in over 30 countries worldwide, Pastis’ defective detective is quickly becoming the next big breakout children’s book character.

ABOUT CANDLEWICK PRESS
Candlewick Press is an independent, employee-owned publisher based in Somerville, Massachusetts. For over twenty years, Candlewick has published outstanding children’s books for readers of all ages, including books by award-winning authors and illustrators such as the National Ambassador for Children’s Literature, Kate DiCamillo, M. T. Anderson, Jon Klassen, and Laura Amy Schlitz; the widely acclaimed Judy Moody, Mercy Watson, and ’Ology series; and favorites such as Guess How Much I Love You, Where’s Waldo?, and Maisy. Candlewick is part of the Walker Books Group, together with Walker Books UK in London and Walker Books Australia, based in Sydney and Auckland. Visit Candlewick online at www.candlewick.com.