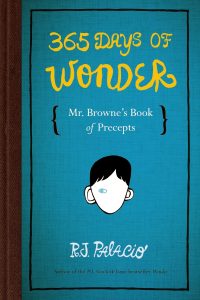 February 13, 2014 (New York, NY)—Random House Children’s Books (RandomHouseKids.com) has acquired three new books and an e-original by R. J. Palacio, author of the blockbuster bestseller Wonder (#thewonderofwonder), it was announced today by Barbara Marcus, President and Publisher. 365 DAYS OF WONDER: Mr. Browne’s Book of Precepts (Alfred A. Knopf Books for Young Readers), a companion book to Wonder, will be released in hardcover on August 26, 2014, with a first printing of 350,000 copies, and THE JULIAN CHAPTER: A Wonder Story e-original will release prior to that on May 13, 2014. Two additional, untitled novels by Palacio were acquired in the deal and will be released on dates to be announced. The books were acquired by and will be edited by Erin Clarke, Executive Editor at Knopf.

The story of a fifth grader born with a facial deformity who attends mainstream school for the first time, Wonder was called “rich and memorable” (The New York Times Book Review) and a “debut novel so remarkable, and so lovely” (The Wall Street Journal). Wonder has sold over 1 million copies since its publication on February 14, 2012. The bestselling middle-grade novel has remained at the top of bestseller lists, spending 97 weeks on the New York Times bestseller list, with 44 weeks in the #1 spot.

Wonder introduced readers to memorable English teacher Mr. Browne and his love of precepts—that is, principles to live by. 365 DAYS OF WONDER: Mr. Browne’s Book of Precepts features precepts for each day of the year—daily quotes and inspiration, with words of wisdom from such notable figures as Anne Frank, Confucius, and Nelson Mandela, along with over 100 Wonder readers who sent Palacio their own precepts. Readers from all over the world submitted more than 1,200 entries in two weeks for inclusion in the book. Also included with the precepts are letters and emails from characters who appeared in Wonder, including Auggie, Summer, Charlotte, Amos, and Julian.

“When R. J. Palacio introduced us to her main character, Auggie, and his incredible story in Wonder two years ago, she instantly captured our hearts—and the hearts of more than one million readers across the country,” says Marcus. “Publishing a new work by Palacio is a special event, and 365 Days of Wonder is the perfect companion book for every fan, young and old, who was moved by the magic of Wonder.”

“While there are many books full of inspirational quotes and sayings, precepts, as defined by Mr. Browne, are a little different,” says Palacio. “Their themes of kindness, strength of character, overcoming adversity, or simply doing good in the world teach those kinds of elemental virtues that parents strive to impart to their kids.”

Palacio’s debut novel featured alternating chapters narrated by various characters; however, the antagonist, Julian, was not included. With the publication of the e-original THE JULIAN CHAPTER: A Wonder Story (on sale May 13, 2014), Julian will be given a voice for the first time. “I had always thought he was an interesting character worthy of further exploration, but I didn’t give him a voice in Wonder because he had nothing to add to Auggie’s narrative over the course of this one very important year,” Palacio explains. “Outside of the context of Wonder, however, I’m able to explore the character much further. I think a lot of children identify with Julian—the bully—whether they admit it or not, and they struggle with whether he has any chance for redemption. I think THE JULIAN CHAPTER will bring some closure for this character who has sparked so much discussion among my readers.”

The four projects were acquired from Alyssa Eisner Henkin of Trident Media for North American rights, to be published by Alfred A. Knopf Books for Young Readers. Listening Library will publish audio editions of the two additional novels to be announced.

R. J. Palacio wrote WONDER, her first novel, while working as Children’s Book Director at Workman Publishing. She is now Editor-at-Large at Workman Publishing and a member of the illustrious roster of authors represented by the Random House Speakers Bureau (RHSpeakers.com). She lives in New York City with her husband, two sons, and two dogs.