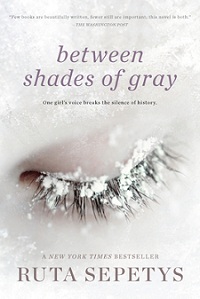 Park City, UT – Sorrento Productions and Tauras Films announced today that they have optioned the film rights to Ruta Sepetys’ New York Times Bestselling WWII-era novel, Between Shades of Gray. The screenplay adaptation was written by Sundance alum Ben York Jones (LIKE CRAZY, BREATHE IN). Marius Markevicius, who directed the Film Arcade/Lionsgate documentary THE OTHER DREAM TEAM and produced Sundance Film Festival hit LIKE CRAZY,is set to direct the project for Sorrento and will produce alongside European-based producer Zilvinas Naujokas of Tauras Films. The U.S./European co-production is scheduled to begin filming in 2014.

Published to critical acclaim in over 40 countries and 26 languages, Between Shades of Gray tells the story of fifteen-year-old Lina Vilkas who is deported to Siberia amidst Stalin’s cleansing of the Baltic region during WWII. Lina, an aspiring artist, secretly documents her harrowing journey with her artwork, hoping that her drawings may reconnect her with her father from which the family has been forcefully separated.  The award-winning novel is a New York Times Bestseller, an International Bestseller, a Carnegie Medal nominee, and has been placed on over 20 state reading lists throughout the country.

“It’s amazing that the atrocities of Stalin and the Siberian mass deportations are still a relatively unknown and untold part of history.  We hope to change that with this film,” said Markevicius. “I’m also thrilled to once again collaborate with Ben York Jones on this adaptation.  Ben has an incredible ability to capture raw emotion and young love in his writing and those two elements will be the key drivers in our film.”

“There’s such a beautiful innocence to Lina’s perspective,” said screenwriter Jones.  “It’s the stuff of hope.  It allows her to believe in love, even under the most horrific of circumstances.  Something with which an older, or more hardened person might struggle.  Her resolve is just inspiring.”

The deal’s closing has fortunate timing as the Lithuanian Parliament approved tax initiatives for film productions in Lithuania beginning January 1st, 2014. These incentives include twenty percent rebates that will be offered for money spent on productions within the country. This project will be among the first productions to take advantage of the newtax incentive system in Lithuania.

ABOUT SORRENTO PRODUCTIONS
Sorrento Productions is a feature film production company based in Santa Monica, CA.  The company, first established in 2005, seeks to develop, produce and finance feature films of all genres for the global market.  Sorrento has produced several feature films that have premiered in competition at the Sundance Film Festival, including THE OTHER DREAM TEAM and LIKE CRAZY.

ABOUT TAURAS FILMS
Tauras Films is a film production company based in the Baltic States (Lithuania). The main objective of the company is to produce high-quality feature films for wide audiences targeting local, CIS and worldwide markets. Their first film, the period adventure FIREHEART: THE LEGEND OF TADAS BLINDA, was a national blockbuster and released locally at the end of 2011, instantly becoming number the number one movie of all time in Lithuania. Their second film, a comedy called LONELY VALENTINE, was released theatrically in 2013 and became the second highest-grossing Lithuanian film of all time.