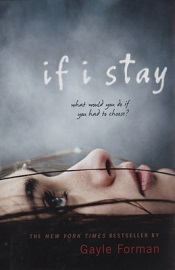 Penguin Young Readers Group first released the book on April 2, 2009. A sequel, entitled Where She Went, followed on April 5, 2011.

“For those not in the know, If I Stay is the story of Mia, a 17 year-old gifted cellist with an adoring family and a bright future who loses everything in a brutal car crash that kills her mother, father, and brother. Untethered from her body at the time of the accident, Mia finds herself in limbo with a terrible choice to make: let go, and move on to whatever comes next; or stay, and learn to live in a world in which the three people dearest to her are gone.”