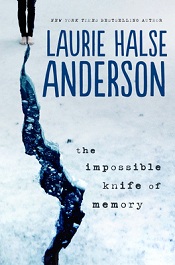 “This is my one beef with Hollywood: It’s great for movie sales, but they’ve created this fiction for us that, when you have a hard thing in your life, it’s going to get fixed and then Your life will be awesome! Forever! Obviously I have a lot of adult readers now, but I feel like my responsibility is to my teen readers, because they’re still figuring the world out. Too many of them have watched movies and television shows in which everything gets wrapped up in a bow in the end, and then when that doesn’t happen in their own life, they get super confused or beat up on themselves. So all of my YA novels have ended in a not fully resolved way, and I do that deliberately because I want to show readers that that’s the way life works. It also leaves the character’s situation a little bit alive in the head of the readers. And I kind of like that. If I can write a book that will help the world make a little more sense to a teen, then that’s why I was put on the planet.”