Home > Blog > Where the Sidewalk Began

Where the Sidewalk Began 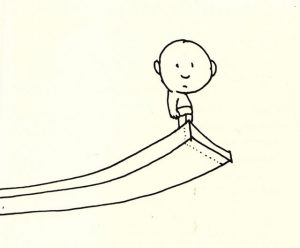 “Shel Silverstein was hardly a prime candidate to become the world’s next great children’s author. After all, the guy wasn’t shy about his distaste for the genre—a fact evident in his 1961 book, Uncle Shelby’s ABZ Book: A Primer for Tender Young Minds…The ABZ Book made it clear that Silverstein hated the condescending brand of writing often used in children’s literature—and what better way to change the state of affairs than to write them better yourself? Convincing Silverstein of that took a fair amount of wheedling and cajoling, but his friend (and children’s author/illustrator) Tomi Ungerer, along with famed Harper & Row children’s editor Ursula Nordstrom, was up to the task. Eventually, they persuaded Uncle Shelby to take a crack at the real thing.”