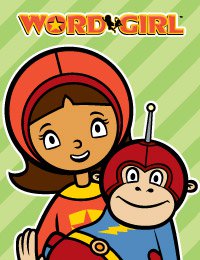 New York, NY — Scholastic Media, a division of Scholastic Inc, the global children’s publishing, education and media company, announced today a new production order from PBS KIDS for 26 additional episodes of WordGirl®, the Emmy® award-winning children’s television series. The popular show, created and produced by Scholastic’s animation studio Soup2Nuts, aims to enrich children’s vocabulary while instilling a love of language and fostering better reading comprehension. The new order will bring the total number of WordGirl episodes to 130, ensuring the series is on air through 2015 in its seventh and eighth seasons.

WordGirl originally debuted in 2006 as twenty two-minute shorts called The Amazing Colossal Adventures of WordGirl; the first season of full half hours aired as WordGirl in 2007. At the time, The New York Times wrote that the hilarious superhero “might just have the strength…to render a big vocabulary cool among school children…[and that the characters have] an irreverence and sophistication that stand(s) out…”. Now in its sixth season,WordGirl is one of only a few select children’s series to have been recognized with three Emmy® awards for writing (in 2008, 2012 and 2013). The show has also won three Gracie awards, a Television Critics Award for ‘Outstanding Achievement in Children’s Animation’, a KidScreen Award for Best Voice Talent, and an iParenting Media Award. Overall awareness of WordGirl has increased 64% since 2009*, and among other extensions, the show has gone on to inspire publishing from Scholastic and new mobile apps for iPad and Android tablets – including last month’s release of the ‘WordGirl Superhero Training App’.

“We are delighted to bring new episodes to the kids and families that have embraced WordGirl so enthusiastically,” said Deborah Forte, President of Scholastic Media and Executive Producer of WordGirl. “From the inception of the series, we knew that WordGirl provided the model of a female superhero who values words and recognizes the power of language; we’re proud to reach this milestone with PBS KIDS and look forward to the continued support of audiences all over the world.”

“As a female superhero who is as popular with boys and she is with girls, WordGirl serves as a positive role model for all kids,” said Lesli Rotenberg, General Manager, Children’s Programming, PBS. “With her amazing vocabulary, WordGirl teaches kids that language can give you power and that the more words they know, the more possibilities they can explore.”

WordGirl follows the everyday life and superhero adventures of “WordGirl” as she fights crime and enriches vocabulary usage, all in a day’s work. Disguised as mild-mannered 5th grader, Becky Botsford, WordGirl arrived on planet Earth when she and her monkey sidekick, Captain Huggy Face, crashed their spaceship. Each episode introduces four new vocabulary words and reinforces their meaning in a variety of contexts through the episode. The show teaches new vocabulary words to children in a variety of fun and interesting contexts, and strives to enrich young audiences’ vocabulary, close the gap for those who don’t grow up in language rich environments, instill a love of language – and foster better reading comprehension.