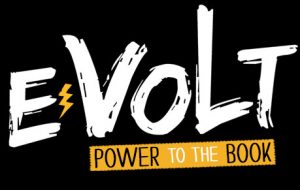 By following http://e-volt.tumblr.com/ readers will be tuned in to Candlewick’s newest YA e-book offerings as well.

NATIONAL BOOK AWARD WINNER The Astonishing Life of Octavian Nothing, Traitor to the Nation, Volume One: The Pox Party by M.T. Anderson

WINNER OF A MICHAEL L. PRINTZ HONOR The Earth, My Butt, and Other Big Round Things by Carolyn Mackler

Finnikin of the Rock by Melina Marchetta

The Naming: The First Book of Pellinor by Alison Croggon

“Tumblr is a haven for teens and young adults so we think this is a great platform to reach out to them about our YA e-books. E-Volt will be a way for YA readers to discover titles and authors and get great deals, regardless of which e-reader they might have,” said Raquel Stecher, Online Marketing Manager at Candlewick Press.

John Mendelson, Senior Vice President of Sales at Candlewick adds, “With more tablets in the marketplace, we are conscious of the need to give consumers every excuse to use them as a reading device.

E-Volt is an exciting extension of our efforts to reach readers directly regardless of their chosen reading platform.  What started as a conversation about an e-book deal site blossomed into what will hopefully become a community for learning about and sharing great reads for teens.”

Candlewick Press, which celebrated its twentieth anniversary in 2012, is an independent, employee-owned publisher based in Somerville, Massachusetts. Candlewick publishes outstanding children’s books for readers of all ages, including books by award-winning authors and illustrators such as Kate DiCamillo, M.T. Anderson, Laura Amy Schlitz, and Jon Klassen; the widely acclaimed Judy Moody, Mercy Watson, and ‘Ology series; and favorites such as Guess How Much I Love You, Where’s Waldo, and Maisy. Candlewick is part of the Walker Books Group, together with Walker Books UK in London and Walker Books Australia, based in Sydney and Auckland. Visit Candlewick online at www.candlewick.com ▸▸