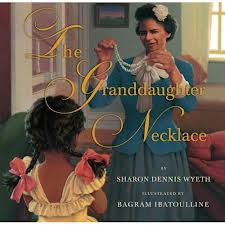 Tell us about your most recent book and how you came to write it.

My most recent book is The Granddaughter Necklace. It’s a picture book based on family stories I collected from childhood on up. I am African American but discovered when I was an adult that my maternal line goes back to a woman in Ireland. This woman is featured in The Granddaughter Necklace along with six other generations in my maternal line. It’s a book I feel as if I’ve been writing my entire life.

Do you think of yourself as a diverse author?

For the major part of my career I’ve created books with protagonists of color. Primarily, because much of my work has its source in real life experiences I had growing up in the Black community. Early on, I also began to think very strongly about my readers and how important it was for those who were children of color to see protagonists of color in some of their literature. I also felt and continue to feel that it is equally valuable for the rest of our readers. So, yes, I would say that as an author I could be categorized as “diverse” (an African American becoming more and more diverse everyday now that I’ve discovered my Irish heritage and had my DNA traced back to tribes in Cameroon!). As a writer, diversity in literature is one of my missions and has characterized my career.

Who is your favorite character of all time in children’s or young adult literature? Very difficult, since I now also teach Children’s Lit and have read so much good stuff. Yet again, I go back to my own formative reading years and say for children’s books: it’s a tie between two pigs. Wilbur in “Charlotte’s Web” and Freddy in the Albert Brooks series “Freddy the Pig.” Freddy was so resourceful and could do just about anything he set his mind to, even though he wasn’t a “human.” “Ramona” by Helen Hunt Jackson was a book written long before I was born but I found it by myself in the public library at around the age of ten. It’s young adult. That book was so important to me because Ramona was a girl of color and I’d never seen that in a book before. I found it all by myself and so identified with her!

Hypothetically speaking, let’s say you are forced to sell all of the books you own except for one. Which do you keep?

I would keep my new book, The Granddaughter Necklace, on account of Bagram Ibatoullne’s illustrations that remind me so much of my own family. After that, the Sonnets of Shakespeare.

What does diversity mean to you as you think about your own books?

Essential; closest to my heart; closest to my experience. But of course I don’t think of my work as “diverse’ but simply my own work, writing what I need and want to write. The term diversity for me primarily makes me think of the reader. I’ve visited schools where the population was mainly Title 1 and when I read “Something Beautiful” a book about a child living in an impoverished neighborhood, well… that book was for those kids. I was so aware of that and one of them even told me once:  “I am in that book.” So diversity in my own writing has much less to do with me than diversity in our readership and the importance of using story as a way to help ALL our readers make connections that are based on our common humanity. So many universals!

What is your thought process in including or excluding characters of diverse backgrounds?

Just do it without thinking that much about it. Except early in my career, I consciously created a Chinese American character (so carefully!) in a “mainstream” mass market series. The idea had been handed off to me. The series was about roommates in a boarding school. The other three protagonists were White but I made sure they were different in other ways, regionally and economically. It’s always been so important to me, right from the start. I was floored when I got mail from Chinese American girls thanking me for creating a character they could identify more closely with.

Write an example of a paragraph that is tone deaf when it comes to cultural diversity, then write the correct version. Explain the differences in the third paragraph.

Name is Corey. Daddy’s name is Roland. Mama’s name is Angel. We live on the Hart plantation. We are slaves. I wish i could read but I will never be able.

All we do is work the whole day.

In the first paragraph, the word “slave” is used. This was a term I tried to skip when writing Corey’s Underground Railroad Diaries. In the second paragraph, I paint a picture of things the family is not able to do and use the word “freedom.” This will lead the reader to an understanding of the family’s circumstances (there’s enough to guess, anyway) and also help the reader to identify with the narrator. The narrator is reading in spite of the “Harts”, which empowers him; the narrator also talks about wanting to be free, which will also help the reader identify with his story and by that I mean any reader, I believe. A largely held stereotype was that there was universal illiteracy among early blacks, most of whom were enslaved. Though there were anti literacy measures, many early African Americans could read and learned to read surreptitiously. The introduction of “bird watching” in the second paragraph (a detail I chose myself for the Underground Railroad series) gives the character of color an interest that is cross cultural and in this instance highly plausible. The boy in the paragraph isn’t a “slave” he’s a “boy” who likes to read, loves his parents and likes to watch birds. His condition is “slavery” or “enslavement.”

Sharon Dennis Wyeth has written award winning fiction and historical fiction for children and young adults. Two of her books are Children’s Book Council Notable Books. Her latest title is The Granddaughter Necklace. You can learn more about Sharon and her books by visiting www.sharondenniswyeth.com.