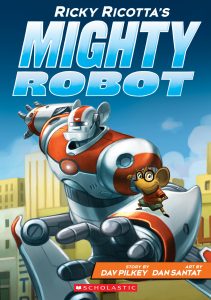 NEW YORK, NY—October 8, 2013—Scholastic, the global children’s publishing, education and media company, announced today that it will publish two new books in the worldwide bestselling Captain Underpants series by award-winning author Dav Pilkey in August 2014, and August 2015. In addition, Scholastic will publish newly re-illustrated editions of Pilkey’s seven-book Ricky Ricotta series, featuring a mouse and his big robot friend, with all new full-color art by bestselling illustrator Dan Santat. Scholastic will reissue Ricky Ricotta novels #1 through #7 starting in May 2014—plus two brand new Ricky Ricotta books (Ricky Ricotta #8 and #9) in Fall 2014 and Spring 2015 respectively. Both the Captain Underpants and Ricky Ricotta books will be published simultaneously by Scholastic in the U.S., Canada, Australia, New Zealand, and the UK in both print and ebook formats. The deal was negotiated by Ellie Berger, President, Scholastic Trade, Amy Berkower at Writers House for Dav Pilkey, and Jodi Reamer at Writers House for Dan Santat, and the books will be edited by Pilkey’s longtime Scholastic editor Anamika Bhatnagar.

“Millions of Captain Underpants fans around the world will rejoice to have two more of George and Harold’s adventures on the way,” said Ellie Berger, President of Scholastic Trade. “And if that wasn’t exciting enough, we are thrilled to introduce a new generation of kids to the Ricky Ricotta series for slightly younger readers. These illustrated chapter books feature Dav Pilkey’s signature warmth and humor, and are perfectly paired with Dan Santat’s colorful, graphic artwork.”

“The Ricky Ricotta books were inspired by my childhood,” said Dav Pilkey. “I always thought it would be so cool to have a gigantic robot as a best friend. He could protect me from bullies, and we could fly around the world together. But the way that Dan Santat has brought these characters to life has exceeded my childhood imagination. I just want to dive right into his amazing color illustrations, and I hope young readers will too.”

“I’m so honored and thrilled to be a part of this exciting project, and to have the opportunity to work with one of my favorite authors,” said Dan Santat. “I have been a fan of Dav Pilkey for so many years. I hope that readers of all ages will fall in love with this series like I have.”

About Ricky Ricotta
Originally published in 2000, Ricky Ricotta’s Mighty Robot, written by Dav Pilkey, was the first in a series of fast-paced early chapter books for younger readers (ages 4-8), with black-and-white line art by Martin Ontiveros. Soon to be published in full color, with all new illustrations by Dan Santat, the Ricky Ricotta series introduces a tiny hero with BIG plans: Ricky Ricotta, a lonely mouse who befriends a giant robot.

About Dav Pilkey
Dav Pilkey created his first stories as comic books while he was in elementary school. Since then, in addition to the Captain Underpants series, his Scholastic books include numerous popular, award-winning books for children, such as Dog Breath, winner of the California Young Reader Medal; The Paperboy, a Caldecott Honor Book; The Adventures of Super Diaper Baby, which debuted at #1 on the New York Times bestseller list; The Adventures of Ook and Gluk: Kung-Fu Cavemen from the Future, a #1 New York Times bestseller, and the Ricky Ricotta and Dumb Bunnies series. For more information about Dav Pilkey, visit www.pilkey.com.

About Dan Santat
Dan Santat wrote and illustrated the graphic novel Sidekicks (Arthur A. Levine Books/Scholastic) and has also illustrated many acclaimed picture books, including the New York Times bestseller Because I’m Your Dad by Ahmet Zappa and Crankenstein by Samantha Berger.  He is writing and illustrating his next picture book, The Adventures of Beekle: The Unimaginary Friend, set to release in April 2014. He is also the creator of the Disney animated hit, The Replacements. Dan lives in Southern California. Please visit his website at www.dantat.com.

About Scholastic
Scholastic Corporation (NASDAQ: SCHL) is the world’s largest publisher and distributor of children’s books and a leader in educational technology and related services and children’s media. Scholastic creates quality books and ebooks, print and technology-based learning materials and programs, magazines, multi-media and other products that help children learn both at school and at home.  The Company distributes its products and services worldwide through a variety of channels, including school-based book clubs and book fairs, retail stores, schools, libraries, on-air, and online at www.scholastic.com.