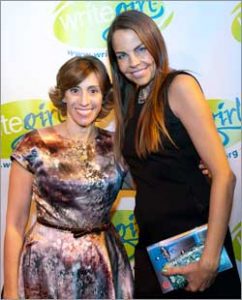 The Dangerous Creatures series will follow Link and Ridley, two fan-favorite characters from Beautiful Creatures. Readers will catch up with Ethan, Lena, and Link as they graduate from high school and get ready to leave the small Southern town of Gatlin, along with Link’s sometime girlfriend, Ridley. The series will launch on December 17, 2013, with Dangerous Dream, an enovella that will tie Dangerous Creatures to the world of the original series. Dangerous Creatures, the first book in the new series, will be published simultaneously in hardcover, ebook, and audio formats on May 6, 2014.

“Our fans have supported Beautiful Creatures and both of us from the beginning, and we are so grateful. This is for them,” said Kami Garcia and Margaret Stohl. “We can’t wait for them to return to Gatlin with us this December. We have more than a few surprises in store for them.”

“We are ecstatic with the massive success of Beautiful Creatures, which has sold nearly 3.5 million copies to date,” said Megan Tingley. “We’re eager to satisfy Kami and Margaret’s passionate fans with the swift release of a riveting enovella just in time for the holidays, and a brand-new novel the following spring.”

To celebrate the announcement of the new series, Kami Garcia and Margaret Stohl will answer fans’ questions during a live Twitter chat on Tuesday, September 17, at 4:00 p.m. PST/7:00 p.m. EST. Fans can ask questions about the new series using the hashtag #DangerousCreatures.

Kami Garcia’s solo debut novel, Unbreakable, will be published on October 1, 2013. The first book in the highly anticipated Legion series, Unbreakable is a romantic paranormal thriller described by Ransom Riggs, author of Miss Peregrine’s Home for Peculiar Children, as “tense and deliciously twisty . . . a breath-stealing midnight run through some of the creepiest locales I’ve seen rendered in fiction.” Eagerly awaited by her fans around the world, Garcia’s forthcoming novel has been praised by Kirkus Reviews for its “cinematic, gripping ghost scenes…[The ending] will leave readers reaching for the next book.” Publishers Weekly hailed, “The reality [protagonist Kennedy] is living is a page-turner.” The book has been sold in fifteen foreign territories thus far.

Margaret Stohl’s solo debut novel, Icons, was published in May 2013. Set in a near-future Los Angeles, Icons is the first book in Stohl’s sci-fi series and was praised by The Magician’s Lev Grossman, who stated, “I love this book.…It’s full of passion and deep truths and the kind of power that people only find when they’re driven far, far past their limits.” Booklist added, “The strong messages of questioning authority, daring to resist injustice, and loyalty to one’s group will resonate with teens who loved The Hunger Games.” Icons is being developed into a major motion picture by Alcon Entertainment, the studio behind Beautiful Creatures, with a screenplay penned by Massy Tadjedin. The second book in the Icons series, Idols, will be published in July 2014.

About Kami Garcia and Margaret Stohl
Kami Garcia has an MA in education and was a teacher and reading specialist for 14 years. She is the #1 New York Times bestselling coauthor of the Beautiful Creatures series and her solo debut young adult novel, Unbreakable, will be published on October 1, 2013. Kami lives in Maryland with her family. You can find her online at kamigarcia.com.
Margaret Stohl is a lifelong science-fiction fan, former video-game designer, and coauthor of the #1 New York Times bestselling Beautiful Creatures series. Margaret’s solo debut young adult novel, Icons, was published in May 2013. Margaret lives in California with her family. Her website is margaret-stohl.com.