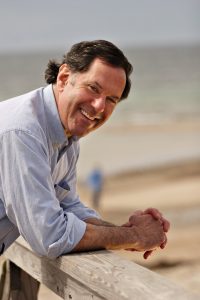 “I’m a huge fan of Spencer Quinn and nothing puts a smile on my face faster than his dog detectives,” said Rachel Griffiths. “It was a natural move to bring Spencer and his canine capabilities to middle grade. There’s no bond stronger than the one between kids and their dogs, and Spencer captures that better than anyone out there.”

“My wife and I have four kids, and while the kids were still all at home we also had three dogs. It might have been an experiment to teach me about the special relationship between kids and dogs, a lesson now coming in very handy (although at the time I might have gotten some of the names confused),” said Spencer Quinn. “I love writing for young people, I love writing from a canine point of view, and I thank the wonderful people at Scholastic for encouraging these two passions to come together.”

About Bowser & Jolene
Bowser is a dog detective on the loose, paired with an eleven-year-old girl, Jolene. Bowser and Jolene live on the Louisiana coast with Jolene’s Grammy. When a prize stuffed marlin is stolen from Grammy’s bait and tackle shop, Jolene and Bowser decide to take on the case. But what looks like a straight forward break in soon becomes as tangled as a tourist’s fishing line.  Was Grammy hiring a treasure map in the marlin? What’s up with Old Man Stiffler, owner of a rival tackle shop, and his juvenile delinquent son? And most sinister of all, why does it suddenly look as if the case has a connection to the death of Jolene’s father, a police officer killed in the line of duty? Told entirely from a hilarious dog point of view, Bowser & Jolene launches a new brand new, slightly slobbery, but utterly winning detective duo.

About Spencer Quinn
Spencer Quinn is the New York Times bestselling author of Dog On It, Thereby Hangs a Tail, To Fetch a Thief, The Dog Who Knew Too Much and the upcoming The Sound and the Furry, out this September from Atria. According to Stephen King, “Spencer Quinn speaks two languages – suspense and dog – very fluently.” Spencer lives on Cape Cod with his wife, Diana, and his dogs, Audrey and Pearl. Spencer Quinn is the alter-ego of bestselling, Edgar Award-winning author Peter Abrahams, whose many crime thrillers include Reality Check, End of Story, Oblivion, and the Echo Falls series for young adult readers.

About Scholastic
Scholastic Corporation (NASDAQ: SCHL) is the world’s largest publisher and distributor of children’s books and a leader in educational technology and related services and children’s media. Scholastic creates quality books and ebooks, print and technology-based learning materials and programs, magazines, multi-media and other products that help children learn both at school and at home.  The Company distributes its products and services worldwide through a variety of channels, including school-based book clubs and book fairs, retail stores, schools, libraries, on-air, and online at www.scholastic.com.  For more information, visit our Media Room at http://mediaroom.scholastic.com.