Dare to Dream…Change the World Contest Launches for 2013-2014 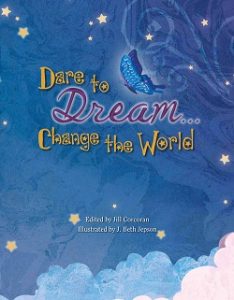 View the contest flyer with guidelines▸▸

DARE TO DREAM…CHANGE THE WORLD CONTEST LAUNCHES FOR 2013-2014

Jill Corcoran, compiler and contributing poet to the award-winning Dare to Dream…Change the World, a children’s collection of biographical and inspirational poems, has announced the back-to-school launch of the Dare to Dream…Change the World Second Annual Writing Contest for Children. As before, the grand-prize winner will receive $1500 worth of Kane Miller and Usborne books for a school or community library of their choice. The top thirty entries will be published as a free e-book by Kane Miller Books.

Originally created and organized by Ms. Corcoran and sponsored by Kane Miller Books and Educational Development Corporation, the contest “aims to promote literacy, poetry writing, and nonfiction research while inspiring students to follow their own dreams.” Following the format of the book, students in third through eighth grade are invited to email a biographical poem together with a non-fiction paragraph about someone who not only dreamed, but took action and made the world a better place. In its first year, the contest generated over 800 entries. New contest details and a list of the 2013 winners can be found at daretodreamchangetheworld.com.

Winner of the American Library Association 2013 Notable Books for a Global Society Award, Dare to Dream…Change the World features work from thirty renowned contemporary children’s poets, including J. Patrick Lewis, former Children’s Poetry Laureate. Each pair of poems in the anthology was inspired by someone whose actions made a difference, not only in their own lives, but in the lives of people all over the world. Subjects form a culturally diverse mix ranging from Jonas Salk to Steven Spielberg, from Christa McAuliffe to Michelle Kwan, with brief descriptions of their lives included. Poems by Jill Corcoran and Bruce Coville frame the biographical-inspired pieces. The collection, which also garnered the California Reading Association’s 2012 Eureka! Silver Honor award and was named a Best Books of 2013 by Bank Street College of Education, features critically acclaimed artwork by J. Beth Jepson.

A free, downloadable curriculum guide for the book is available both on the contest website and at kanemiller.com. A description of a classroom application was cited in the “Common Core Connections” column in the September 2012 Book List. An AR quiz is available.

Kane Miller/Usborne Books are available to order through your EDC sales representative or by calling 800-475-4522.