Microaggressions: Those Small Acts that Pack a Big, Negative Punch

More and more, the word “microaggression” is cropping up in the world of children’s literature.  A “microaggression” —a term coined by Harvard professor Chester M. Pierce in 1970 — is a tiny act of bigotry. Examples include crossing the street when a dark-skinned stranger appears, giving a groan when the word “Feminism” comes up, or using “homo” as a synonym for “uncool” (Pierce used it to describe only race-related acts, but the word has evolved to encompass bigotry in general). Viewed individually, these acts are almost negligible; taken as a whole, they constitute an evolution of the very nature of bigotry, from overt, conscious and public bigotry to a more nebulous form that is hard to identify and even harder to acknowledge (Sue et al, 2007).

We who work in the field of children’s literature—librarians, teachers, booksellers, authors, illustrators, bloggers, publishers—must be aware of microaggressions. We constantly read aloud, recommend books, and do everything in our power to turn kids into bookworms. As fervently as we extoll the benefits of reading, we must also consider whether the books we love confirm kids’ dignity and worth as human beings, in ways small and large.
What one person perceives as a microaggression may be a non-entity to another. At what point does an incident become a microaggression? What responsibility do I, as a librarian and teacher, have to filter out potentially harmful books?  Is it better not to read something hurtful—or to read it, and then discuss it? These were questions with which I wrestled after a read-aloud incident a few months ago. 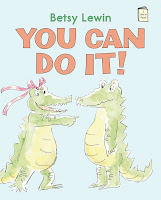 The book I chose was Betsy Lewin’s You Can Do It.  There is much to love in this story of an alligator who, cheered on by a good friend, overcomes a bully to win the race. But a seemingly-miniscule element—a hair ribbon—produced a heartrending effect on a member of my audience.

The kindergarten group I read to included a girly-girl.  A very girly girly-girl. We’ll call her Charlotte.  Charlotte loves to read, has a shy smile, likes a good hug, and almost always wears ribbons in her hair. As I held up the book, she observed the ribbon-wearing alligator and smiled.  I showed the title page and cleared my throat, but before I began reading, an argument broke out.  Which character was saying “You can do it!”, and which was the “doer”? The differences of opinion arose because although the cover makes it clear that the alligator wearing the ribbon is saying “You can do it!”, the title page suggests the opposite; it appears that the bare-headed alligator is leading the be-ribboned alligator to something that she will, presumably, do.  Charlotte was adamant that the alligator with the ribbon would be the “doer”. “Let’s find out,” I said, and we began. 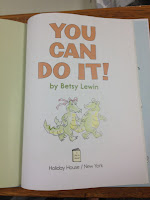 As we read, the kids who had guessed correctly—the ribbon-less alligator is the “doer”—celebrated their victory with smiles and “yes!”es. Most of those who had guessed wrong gave a little groan and then recovered. But Charlotte’s face grew dark. Her chin dropped. Her eyes found the floor.  Her whole body curled inward. And she gave a tiny, angry tug at the ribbon in her hair.

Charlotte’s reaction cut straight to my bone. I wondered what was going on in her head. Anger at being wrong? Probably, but was there something else? Was it shame that she was, due to a fashion choice, now classified as a cheerleader rather than a doer? Did she now believe that to have any chance of winning a race, she must remove her ribbon? Or did she extrapolate that girls en masse (after all, the presence of the hair ribbon does, to the casual reader, indicate gender) have no business being doers?

I tried to salvage it.  I pointed out that we didn’t know whether the main character was a boy or girl. Maybe they were both girls!  No luck.  In the world of picture books (reinforced over and over again, particularly with animals), the clothes make the gender. And even if we did accept that both alligators are female, Charlotte might have been thinking, “female alligators can do it, but not those who wear ribbons”.

I do not know what was in Charlotte’s head, and if not for the look on her face and her extreme body language, I would not have engaged in any sort of analysis after reading this book to the class. It is possible that my response is overly sensitive to Charlotte’s reaction, or that Charlotte’s reaction had to do only with guessing wrong. Ultimately, when analyzing for microaggressions (or, for that matter, macroaggressions), the question is “what effect does this have on its audience?” In this case, You Can Do It positively affected most of the children in my group, who enjoyed the fun, inspiring story. My impression of Charlotte, however, was that she seemed to feel devalued and type-cast. And this reaction—even if it was just Charlotte’s—is valid and deserves consideration. It may or may not rise to the level of “microaggression” classification but, either way, it is a helpful place to start an important conversation because seemingly small slights sometimes pack a disproportionately big punch.
In my opinion, the most dangerous thing about microaggressions is that the dominant group (eg white people, straight people, men, highly educated people…) often can’t see them at all.  They see only a person from the non-dominant culture go to pieces or start a fight over something that looks negligible. They say, “Wow.  ______ people are so sensitive!” or “Why do you have to be so angry?”  Those who experience such feelings then start to believe that their anger is not legitimate, that they are overly sensitive, that the smothering blanket of microaggressions they are wrapped in is their rightful burden.
Teachers, librarians, and parents: Have you ever had an experience similar to the one I describe?  How did you handle it? What conclusions did you draw? Microaggressions are hard to think about and harder to talk about. But we need more conversation, not less. Let’s get started.

Allie Jane Bruce is Children’s Librarian at the Bank Street College of Education.  She began her career as a bookseller at Politics and Prose bookstore in Washington, D.C. and earned her library degree from Pratt Institute.  She tweets from @alliejanebruce and blogs at http://bankstreetcollegeccl.wordpress.com.