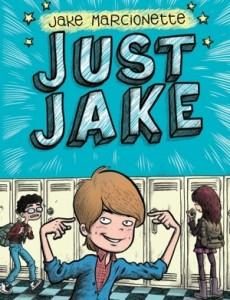 13-year-old Jake Marcionette will publish his debut middle grade series, JUST JAKE with Grosset & Dunlap, an imprint of Penguin Young Readers Group. JUST JAKE introduces readers to sixth-grader Jake Ali Mathews, whose life is turned upside down when his family moves from Florida to Maryland. Jake has to adapt to a new school and make friends while staying under the radar of the school bully. The full-color novel is filled with doodles and illustrations. The deal for two books, with an option for more, was brokered by Francesco Sedita, President and Publisher, Grosset & Dunlap and Dan Lazar, Writers House. Penguin has North American rights. The first novel will be published in February 2014 with the second following a year later.

Francesco Sedita said, “I was blown away when I learned that Jake Marcionette was only 12 years old when he wrote JUST JAKE.  This book reminded me of what it felt like to worry about finding the right classrooms, take impossible pop quizzes, and figure out the rules of popularity . . . and made me laugh the whole way through.  I’m certain that Just Jake will become a favorite among young readers looking for an authentic voice that captures this moment their lives.”

Jake Marcionette commented “School can be scary and challenging in so many ways, but it can also be really funny. Whether in school, at home, or on the lacrosse field, I try to find the “funny” in my daily experiences. This book began as a collection of doodles and sketches of my classmates, and it has developed into a truly AWESOME book. I hope kids enjoy reading it as much as I enjoyed writing it.”

Jake has always ranked the kids at school using his hand-made, humorous “Kid Cards,” and when he arrives at his new school, Jake starts building a new collection.  But what happens when the school bully decides Jake’s next in line for annihilation and his Kid Cards get into the wrong hands?!! JUST JAKE is a genuine—and as Jake himself would say, AWESOME!—world of school, family, friends, and teachers; it’s the product of a writer talented well beyond his years.

Jake Marcionette was just 12 years old when he wrote JUST JAKE. He’s now in seventh grade and lives with his mom, dad, and sister in Florida.   In addition to writing and being AWESOME Jake loves playing lacrosse and annoying his big sister, Alexis.