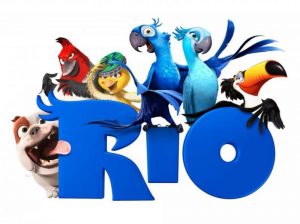 “When I first saw ‘RIO’ a few years ago I was completely swept away, just like everyone else,” said Papercutz Editor-In-Chief Jim Salicrup. “The breathtaking vistas, the music, and Blu’s journey; all of it is amazing. The storytellers at Blue Sky Studios are so talented and we jumped at the chance to tell more tales in the rich world they’ve created.” The series will be written by Stefan Petrucha (POWER RANGERS, NANCY DREW) and illustrated by fan-favorite animation comics artist James Silvani (Darkwing Duck, Richie Rich). The first volume, entitled, “Snakes Alive!” catches up with Blu and Jewel, the last surviving Blue Spix Macaws, as they raise their kids in the Blu Bird Sanctuary near Rio de Janeiro. When the sanctuary is threatened by financial trouble, Blu and the gang embark on a quest deep into the jungle to find an ancient treasure that may save their home.

“Movie-goers around the world, both young and old, fell in love with Blu and Jewel. Through this special partnership with Papercutz, “RIO”will take on a new form for fans to enjoy in graphic novels,” said Roz Nowicki, Executive Vice President of Global Sales & Retail, Twentieth Century Fox Consumer Products. “The creative team behind this series and the trusted publishing team at Papercutz will no doubt treat audiences to engaging and fun adventures with the lovable characters of the film franchise.”

The entire cast of the animated smash RIO returns in RIO 2, and they are joined by a new flock of top actors and musical talents. Rich with grandeur, character, color and music, RIO 2 finds Jewel (Anne Hathaway), Blu (Jesse Eisenberg) and their three kids leaving their domesticated life in that magical city for a journey to the Amazon. They encounter a menagerie of characters who are born to be wild, voiced by Oscar nominee Andy Garcia, Oscar/Emmy/Tony-winner Rita Moreno, Grammy winner Bruno Mars, and Tony winner Kristin Chenoweth.

Popular with reluctant readers and gifted readers alike, Papercutz graphic novels cover a wide range of genres, reading levels, and favorite characters including The Smurfs, LEGO® NINJAGO, Geronimo Stilton, Nancy Drew, and many more. Papercutz is proud to be the largest standalone publisher exclusively dedicated to children’s graphic novels, with books available at all major retailers, bookstores, and comic book stores, and e-books available on comiXology, iVerse, and all e-reader devices.