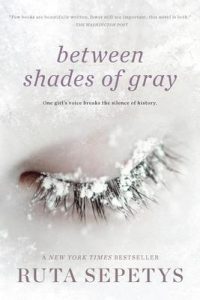 Author Ruta Sepetys was decorated with Lithuania’s ‘Cross of the Knight of the Order’ by the President of Lithuania in a formal ceremony last weekend at the nation’s Presidential Palace in Vilnius. The decree on the conferment of the honor of ‘Knight’ was bestowed upon Sepetys in recognition for her novel  Between Shades of Gray and her continued global work sharing the little-known history of Stalin’s ethnic cleansing in the Baltic states of Lithuania, Latvia, and Estonia.

Between Shades of Gray tells the tragic story of fifteen-year-old Lina Vilkas who is deported from Lithuania to Siberia in 1941 with her mother and younger brother. Sepetys has toured internationally for three years, presenting the novel and associated history in dozens of countries.

“It is an indescribable honor to be bestowed with ‘Cross of the Knight of the Order,'” said Sepetys at the Presidential Palace.  “As writers, we try to give voice to those who will never have a chance to tell their story. My goal is that through studying these tragic parts of history we can learn from them, and create hope for a more just future.”

“All of us at Penguin Random House are so proud of Ruta and of the international outreach Between Shades of Gray has achieved,” said Michael Green, President and Publisher of Philomel, an imprint of Penguin Young Readers Group. “Ruta has touched readers around the globe and given voice to so many who once thought they had none. That is the power of a great writer.”

The Order for Merits to Lithuania contain five classes in ascending order – Knight, Officer, Commander, Grand Commander, and Grand Cross. Sepetys received the medal and honor of ‘Knight’ on July 6th which is Lithuanian State Day, the Day of Coronation of Lithuanian King Mindaugas. Attached to Sepetys’s medal is a golden book, signifying the honor is under the classification of arts and culture.

An author of historical fiction, Ruta Sepetys is the daughter of a Lithuanian refugee and lives in Nashville, Tennessee. Her debut novel,Between Shades of Gray, is a New York Times bestseller, a Carnegie Medal nominee, and is currently published in 43 countries and 26 languages. Sepetys’s new novel, Out of the Easy, is also a New York Times bestseller and was published just this year.

In the United States, Ruta Sepetys is published by Philomel, a division of Penguin Young Readers Group. The list of international publishers can be found at the following link: www.rutasepetys.com/international.