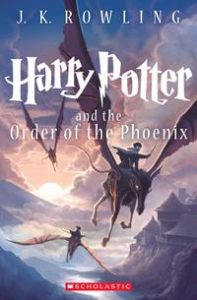 New trade paperbacks and boxed set with covers by Kibuishi will be released on August 27, 2013.

New York, NY (July 1, 2013) — Fans of Harry Potter today revealed the new cover for Harry Potter and the Order of the Phoenix – the fifth of seven new trade paperback editions illustrated by New York Times bestselling author and illustrator, Kazu Kibuishi.  After discovering the image on the Scholastic website, the fans quickly shared the news and the stunning image on fan sites, Twitter and other social media sites. The cover of the first five books in the new trade paperback format can be found at http://mediaroom.scholastic.com/harrypotter .

“Devoted Harry Potter fans scour the web every day for any news about the series, and we were happy to have them discover and reveal the fifth new cover by the talented Kazu Kibuishi,” said Stacy Lellos, VP, Marketing, Scholastic Trade Publishing.  “With the reveal for the first book on Good Morning America, the second third and fourth book covers at Book Expo America, the LeakyCon convention and the American Library Association convention respectively, it took no time for fans to catch the fifth cover right on the Scholastic website.  We have two more fun reveals planned in the coming month.”

The complete series of new books and a new boxed set from Scholastic (NASDAQ:SCHL), the global children’s publishing, education and media company, will be available on August 27, 2013, as part of the celebration of the 15th anniversary of the U.S. publication of Harry Potter and the Sorcerer’s Stone, the original book in J.K. Rowling’s best-selling Harry Potter series, published in September 1998.

Kazu Kibuishi is the Eisner-nominated creator of the #1 New York Times bestselling Amulet series of graphic novels, as well as the comic collection Copper, both published by Graphix/Scholastic. He is also the founder and editor of the Flight Anthologies, a critically acclaimed comic series; and the creator of Daisy Kutter: The Last Train, which was named a YALSA Best Book for Young Adults. Kazu Kibuishi lives in Alhambra, California with his family. Visit him at www.boltcity.com and on Twitter at @BoltCity.

For more information about Scholastic visit our media room at http://mediaroom.scholastic.com

For more information about Harry Potter and the new paperback releases, visit http://mediaroom.scholastic.com/harrypotter. Two more new covers will be revealed in the coming weeks.