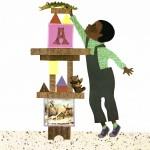 More Than $800,000 Given Directly to Educators Whose Programs Reach Beyond the

NEW YORK—This is the 25th year that the Ezra Jack Keats Foundation has awarded Minigrants to teachers and librarians at public schools and libraries across the United States. This year, a total of 59 grants were awarded to educators in 29 states with each recipient receiving up to $500 for specific programs that they have planned for the next academic year.

“Reflecting on the past 25 years of the Ezra Jack Keats Minigrant Program gives us great pride and satisfaction, knowing that we have directly supported so many extraordinary teachers and librarians,” says Deborah Pope, Executive Director of the Ezra Jack Keats Foundation. “In an environment where educators have increasingly limited resources, we applaud those who have reached beyond the basic curriculum to create programs that inspire and encourage students in a creative and cooperative context.”

Since 1987, the Foundation, founded by the late Caldecott award-winning children’s book author and illustrator Ezra Jack Keats, has provided more than $800,000 in support of programs spanning the 50 states and the U.S. Commonwealth. To receive an award, educators must have applied for funding for a specific program that fosters the love of learning, enhances creative expression and optimizes interaction between educators and students.

Among the programs supported by Ezra Jack Keats Minigrants this year are:

Evolution of the Minigrant Program

Public education is one of the greatest legacies of our country, one that benefits children from every walk of life. For Keats, it was at public school that he received his greatest encouragement to pursue his vocation as an artist and at the public library that he found a haven that introduced him to the wonders of art history. To offer a similar experience to new generations, the Ezra Jack Keats Foundation created the Minigrant Program.

To learn more about the Ezra Jack Keats Minigrant Program and to view a complete list of award recipients visit www.ezra-jack-keats.org/minigrant-program/.

Founded by the late Caldecott award-winning children’s book author and illustrator, the Ezra Jack Keats Foundation supports arts and literacy programming in public schools and libraries across the country, with the goal of bringing the joy of reading and learning to all children while highlighting the importance of diversity in children’s books. In addition to the Minigrant Program, the Foundation sponsors the Ezra Jack Keats New Writer and New Illustrator Awards, which honor books that, in the spirit of Ezra, portray the universal qualities of childhood, a strong and supportive family and the multicultural nature of our world. The Foundation also sponsors the Ezra Jack Keats/New York City Department of Education Bookmaking Competition for grades 3-12, among others. For information about the Foundation, please visit www.ezra-jack-keats.org.