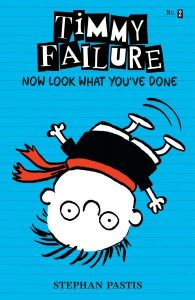 in the Bestselling Timmy Failure series,

SOMERVILLE, MA – June 3rd, 2013– Total Failure Inc. is back in business. Candlewick Press is announcing the publication of a follow up book to Stephan Pastis’ Timmy Failure: Mistakes Were Made, which was published in February 2013 and became an instant bestseller. Timmy Failure: Now Look What You’ve Done is releasing globally on Feb 25th, 2014 in a deal brokered by Dan Lazar of Writer’s House.

In this second adventure, the over-confident Timmy is certain that he alone can solve a school-wide competition to find a stolen globe. Is the competition in fact rigged, as Timmy suspects? And will the combined skills of Timmy, his business partner polar bear Total, and a new character on the scene—his eccentric Great-Aunt Colander—suffice to win Timmy the much-needed prize money?

The first book has spent 12 consecutive weeks on the New York Times and National Indie Bestseller lists in the U.S. and rights have been sold in 28 countries to date.  Widely praised by media and reviewers for its “step above the rest” approach to the illustrated middle grade genre, one Austin, Texas newspaper writer aptly declared, “With its high-low mix of humor and surprisingly sophisticated storytelling…“Failure” is anything but.”

Candlewick Press’ announced first print for the publication of Now Look What You’ve Done in February 2014 will be a minimum of 350,000 copies, and will be supported by an extensive consumer marketing campaign and national author tour.

Stephan Pastis is the creator of Pearls Before Swine, an acclaimed comic strip that appears in more than six hundred and fifty newspapers and boasts a devoted following in print, online, and in a number of bestselling books.  Timmy Failure: Mistakes Were Made was his first book for young readers. He lives in Northern California.

Candlewick Press, which celebrated its twentieth anniversary in 2012,is an independent, employee-owned publisher based in Somerville, Massachusetts. Candlewick publishes outstanding children’s books for readers of all ages, including books by award-winning authors and illustrators such as M. T. Anderson, Kate DiCamillo, Laura Amy Schlitz, and David Ezra Stein; the widely acclaimed Judy Moody, Mercy Watson, and ‘Ology series; and favorites such as Guess How Much I Love You, Where’s Waldo, and Maisy. Candlewick is part of the Walker Books Group, together with Walker Books UK in London and Walker Books Australia, based in Sydney and Auckland. Visit Candlewick online at www.candlewick.com.