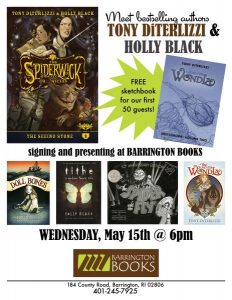 The celebration at Barrington Books kicks off with a special presentation and book signing by bestselling authors Tony DiTerlizzi and Holly Black–creators of THE SPIDERWICK CHRONICLES—on Wednesday, May 15 from 6-8pm. The first fifty guests will receive a free, limited edition sketchbook by Tony DiTerlizzi!

THE SPIDERWICK CHRONICLES, which has more than 12 million copies in print worldwide, has been adapted into a feature film, and translated in more than thirty countries is about three siblings who have adventures in the fantastical world of fairy.To mark SPIDERWICK’s tenth anniversary, Simon and Schuster is reissuing the books with all-new covers by Tony DiTerlizzi.  Barrington Books will have all the new editions on hand at the event, along with several others of the authors’ bestselling titles.

To accommodate the large audience that is expected for the SPIDERWICK event, the presentation and book signing will be held in an event space adjacent to the store.  For more information, please call Barrington Books at 401-245-7925.

Next, story hour fans who enjoy listening to read-alouds from host Margie Reed in the store’s beautiful children’s book section every Thursday at 10am, will get a special treat on Thursday, May 16. Mary Jane Begin, author and illustrator of the new picture book: MY LITTLE PONY: UNDER THE SPARKLING SEA and many other award-winning titles, will read her new book and do a special MY LITTLE PONY drawing demonstration for the kids.

MY LITTLE PONY: UNDER THE SPARKLING SEAis a brand new My Little Pony underwater adventure—written and illustrated by award-winning author-illustrator, Mary Jane Begin, and published by Little, Brown Books for Young Readers.

The panel of authors includes:

Kimberly Newton Fusco is the author of BEHOLDING BEE and two other novels, TENDING TO GRACE and THE WONDER OF CHARLIE ANNE, both of which garnered many accolades. TENDING TO GRACE received the American Library Association’s Schneider Family Book Award and a starred review in Booklist: “This quiet, beautiful first novel makes the search for home a searing drama.” THE WONDER OF CHARLIE ANNE was an ALA Amelia Bloomer Selection and a Bank Street College of Education Best Children’s Book of the Year.  In a starred review, Kirkus wrote: “Good humor, kindness and courage triumph in this warm, richly nuanced novel that cheers the heart like a song sweetly sung.”

Before becoming a novelist, Ms. Fusco was an award-winning reporter and editor for the Worcester Telegram & Gazette. She lives in Foster, Rhode Island, with her family. You can visit her on the Web at kimberlynewtonfusco.com.

Lynda Mullaly Hunt, author of ONE FOR THE MURPHYS

Lynda Mullaly Hunt is the author of middle-grade novel, ONE FOR THE MURPHYS (Nancy Paulsen Books/Penguin), winner of The Tassy Walden Award: New Voices in Children’s Literature. She is also a former teacher and Scenario Writing coach. Lynda has been Director of the SCBWI-NE Whispering Pines Retreat for six years. Her second novel, ALPHABET SOUP is due out from the same publisher in spring, 2014. Lynda lives with her husband, two kids, impetuous beagle and beagle-loathing cat. You can visit her on the Web at http://lyndamullalyhunt.com.

Ammi-Joan (A.J.) Paquette is the author of NOWHERE GIRL (Walker, 2011), and THE TIPTOE GUIDE TO TRACKING MERMAIDS (Tanglewood, 2012), as well as the forthcoming novels PARADOX (Random House, 2013) and RULES FOR GHOSTING (Walker, 2013), and the picture book GHOST IN THE HOUSE (Candlewick, 2013). She is also a literary agent with Erin Murphy Literary Agency, representing children’s and YA authors. She lives outside of Boston with her family and her very tall to-read pile. You can visit her on the Web at http://www.ajpaquette.com

Kristen Tracy, author of THE REINVENTION OF BESSICA LEFTER

Kristen Tracy writes books for teens, tweens and young readers as well as poetry for adults. She grew up in a small town in Idaho, but left there to go to Los Angeles where she earned my B.A. in English from Loyola Marymount University. She also has an M.F.A in poetry from Vermont College, an M.A. in American Literature from Brigham Young University, and a Ph.D. in English from Western Michigan University, where she was an All-University Creative Scholar. In addition to writing books, and volunteering as a gardener on Alcatraz, she’s spent a lot of her life teaching at places like Johnson State College, Western Michigan University, BYU, and Stanford University. Her other novels for middle grade readers include CAMILLE MCPHEE FELL UNDER THE BUS, BESSICA LEFTER  BITES BACK and TOO COOL FOR THIS SCHOOL (forthcoming, August 2013). She has also written several novels for teens/ young adults including LOST IT, A FIELD GUIDE FOR HEARTBREAKERSand SHARKS & BOYS. She lives in Providence, Rhode Island with her husband and young son. You can visit her on the Web at http://www.kristentracy.com.