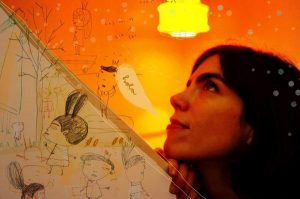 Isol has written and illustrated 10 children’s books, starting with her 1997 debut Vida de Perros (A Dog’s Life). She has also illustrated works by other authors, including Argentine poet Jorge Lujan and U.S. novelist Paul Auster. Her illustrations have the feel of a child’s drawings, which she says reflects her desire to show readers that it’s OK to break the rules.

more at The Huffington Post▸▸