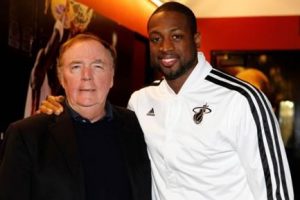 March 4, 2013, New York, NY — It was announced today that #1 bestselling author and two-time Children’s Choice Book Award “Author of the Year” nominee James Patterson will team up with two-time Miami Heat champion and New York Times bestselling author Dwyane Wade for a national online webcast for kids across the country called ONE ON ONE: Fundamentals with Dwyane Wade and James Patterson. In collaboration with NBA Cares, the Wade’s World Foundation, ReadKiddoRead and Hachette Book Group, ONE ON ONE will highlight the importance of reading for success in life and will air on April 25, 2013 at 1pm ET. The webcast will be available free of charge to schools, libraries, and for home viewing via www.JamesPattersonEvents.com, where viewers can sign up in advance to watch.

“As a new author, I am very excited to join forces with acclaimed author James Patterson to advocate the importance of literacy throughout the country,” said Wade, author of the New York Times bestseller A Father First: How My Life Became Bigger than Basketball. “My foundation and I strive to educate children on the benefits of reading and the important role it plays in their lives by preparing them for success in school and in life.”

Patterson said, “Getting our kids reading is a matter of life and death; this is not about grades or what college these kids might be going to. This is about saving kids’ lives, and if we don’t get our kids reading now, many of them aren’t going to make it. We have to get that light to go off in their heads at an early age — before or around the middle school years. I’m so glad I’m partnering with someone like Dwyane, who gets it — that getting our kids reading is preparing them to face the world.”

On March 21, Patterson and Wade will sit down at Ponce De Leon Middle School in Coral Gables, FL, for a conversation about reading that will be moderated by six-time Emmy Award winner and Miami Heat courtside reporter Jason Jackson. Kids across the country will be able to submit questions to their favorite author and their favorite NBA superstar in advance via social media for the chance to hear directly from Patterson and Wade. The webcast will also include special messages from additional NBA All-Stars encouraging kids to read.

Patterson and his publisher, Hachette Book Group, will make a major donation of books in conjunction with the webcast. On March 27, Wade returns to his hometown of Chicago to play against the Bulls and for every point he scores Hachette Book Group will donate 1,000 copies of Patterson books to young readers in the Miami-Dade school system.

From unheralded draft pick to MVP of the 2006 NBA Finals to 2008 Olympic gold medalist to 2012 NBA champion, Dwyane Wade has had a whirlwind career in the last eight years. In 2006, Dwyane led his team to Miami’s first-ever NBA championship, and five years later he helped the Heat reach the 2011 NBA Finals. In 2012, Dwyane won his second NBA championship. The Wade’s World Foundation, established in 2004, provides support to various educational, health, and family service programs, in particular those that benefit underserved communities. In 2011, Wade was appointed to President Obama’s fatherhood task force. In September 2012, he became a New York Times bestselling author, with the release of his first book, A Father First: How My Life Became Bigger than Basketball. He lives in Florida with his family.

Hachette Book Group is a leading trade publisher based in New York and a division of Hachette Livre, the second-largest trade and educational publisher in the world. HBG publishes under the divisions of Little, Brown and Company, Little Brown Books for Young Readers, Grand Central Publishing, Orbit, Hachette Nashville, and Hachette Digital.

Since his first novel, The Thomas Berryman Number, won the Edgar Award in 1977, James Patterson’s books have sold more than 275 million copies worldwide. His Alex Cross series, including Kiss the Girls and Along Came a Spider, is the most popular detective series of the past twenty-five years. In total, his Middle School, Maximum Ride, Daniel X, and Witch & Wizard series for young readers have spent more than 230 weeks on national bestseller lists, and all four series are in Hollywood development. His lifelong passion for books and reading led James Patterson to launch a website, www.ReadKiddoRead.com, to give adults an easy way to locate the very best books for kids. He writes full-time and lives in Florida with his family.

NBA Cares is the league’s global social responsibility program that builds on the NBA’s mission of addressing important social issues in the United States and around the world. Through this program, the NBA, its teams, and its players have donated than $210 million to charity, completed more than 2.3 million hours of hands-on community service, and created more than 760 places where kids and families can live, learn, or play, in 23 countries and territories on 5 continents. NBA Cares works with internationally recognized youth-serving programs that support education, youth and family development, and health-related causes, including: KaBOOM!, Special Olympics, Boys and Girls Clubs of America, UNICEF, the Make-A-Wish Foundation of America, and the Global Business Coalition on HIV/AIDS, Malaria and Tuberculosis.