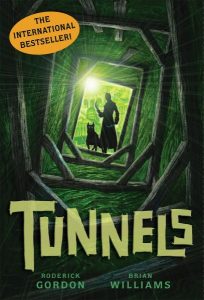 (Beverly Hills, Calif.) February 28, 2013 – Relativity Media announced today they have signed Mikael Håfström (The Tomb, 1408) to direct a film based on the New York Times best-selling internationally-acclaimed fantasy adventure book series Tunnels. The script by Andrew Lobel is based on the adapted screenplay originally written by Joel Bergvall & Simon Sandquist. Tunnels is the film adaptation of the first installment of the novel series from Scholastic/Chicken House publishing, by authors Roderick Gordon and Brian Williams, which has sold over one million copies and has been published in nearly forty countries worldwide.

The authors have already completed five sequels with the sixth and final book in the series, Terminal, to be published in the U.S. this Fall. The property was unearthed by Barry Cunningham, the man credited with discovering Harry Potter creator J.K. Rowling and whose boutique Chicken House imprint is part of Scholastic, the world’s largest publisher and distributor of children’s books and the U.S. publisher of the Harry Potter and the Hunger Games series.

Tunnels is a thrilling, epic fantasy adventure for all ages. Beneath the streets of London, two teenage boys discover an incredible, hidden underground world where a secret civilization has been desperately waiting for a hero to save them all. The deeper they go, the closer they get to unearthing an evil that could destroy the world above and put an end to the lives they once lived.

Tunnels is being produced by Mark Canton (300, Immortals), Neil Canton (Back to the Future) and Danny Davids alongside Relativity’s CEO Ryan Kavanaugh (The Fighter). Relativity’s President Tucker Tooley (The Fighter) will executive produce with Kelly Dennis (1408). Atmosphere’s David Hopwood will serve as co-producer.

Cunningham said, “Only a few times in my life have I felt that rush of imagination in a story that I know is going to sweep up an audience in its grip, Tunnels made me believe in adventure, bravery and a new world.”

Tooley said, “Andrew has written an incredible script and Mikael brings a creative and powerful vision to this project. The Tunnels novels have proven to be one of the most immensely exciting adventure series in recent years and we can’t wait to translate that excitement to the big screen.”

“The originality of the book and its sequels, which uniquely combine the adventure of Indiana Jones with the magic of Narnia, along with its franchise potential, is what attracted Relativity, Neil, Danny and myself to Tunnels and I’m delighted to be producing it with them,” Mark Canton added. “Having just finished TheTomb with Mikael Hafstrom, I know first hand that he’s the perfect person to direct this epic fantasy, and Andrew Lobel’s script has captured every bit of the incredible world that Roderick Gordon and Brian Williams have created.”

“Barry Cunningham clearly has a keen eye for spotting authors whose epic stories appeal to readers of all ages around the globe,” said Ellie Berger, President, Scholastic Trade. “Scholastic is proud to be the American publisher of the bestselling Tunnels series, and we look forward to seeing this underground and imaginative world expand through film.”

Relativity’s Jason Barhydt will oversee the project for the studio.

Relativity Media is a next-generation studio engaged in multiple aspects of entertainment, including full-scale film and television production and distribution, international sales and distribution, the co-financing of major studio film slates, music publishing, sports management and digital media. Additionally, the company makes strategic partnerships with, and investments in, media and entertainment-related companies and assets.

To date, Relativity has produced, distributed, and/or structured financing for more than 200 motion pictures. Released films have accumulated more than $17 billion in worldwide box office receipts. Relativity’s recent films include: Safe Haven, Movie 43, House at the End of the Street, The Bourne Legacy, The Raven, Mirror Mirror, Act of Valor, Haywire, Immortals, Tower Heist, Bridesmaids, Limitless, Hop, Cowboys & Aliens, Battle: Los Angeles, Little Fockers, The Fighter, The Social Network, Salt, Despicable Me, Grown Ups, Dear John, It’s Complicated, Couples Retreat and Zombieland. Upcoming films for Relativity include: 21 and Over, Paranoia and Malavita. Forty-six of the company’s films have opened to No. 1 at the box office. Relativity films have earned 63 Oscar® nominations, including nods for The Fighter, The Social Network, The Wolfman, A Serious Man, Frost/Nixon, Atonement, American Gangster and 3:10 to Yuma. Seventy-two of Relativity’s films have each generated more than $100 million in worldwide box-office receipts.