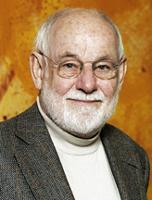 New York, NY – February 11, 2013 – Eric Carle, the beloved and international bestselling author of more than seventy books for children including classics The Very Hungry Caterpillar and Brown Bear, Brown Bear, What Do You See?, will publish a new picture book with Philomel, an imprint of Penguin Young Readers Group.  Scheduled for publication in Fall 2013, FRIENDS is a deeply personal book for Eric Carle, one that explores the love that binds people and the obstacles they will overcome in order to be together.

Eric Carle commented, “Friends dates back to 1952, when I was a 22 year greenhorn who arrived in New York City from Germany, speaking poor English and carrying a cardboard suitcase and a portfolio of my graphic designs. It was my good luck to meet Leo Lionni, then the Art Director of Fortune magazine, who became my mentor. Upon his recommendation I got my first job in the new world as a graphic designer with The New York Times. After that a loose and infrequent friendship with Leo developed that lasted until his death in 1999. Friends started out as a tribute to Leo Lionni, but the story somehow swerved into the story of another friendship, that of two small children. All friendships are somehow connected.”

“A new Eric Carle book is always an event,” said Michael Green, “but to have a story that feels so personal and that works on so many levels is especially gratifying. Eric’s art is as bold and vibrant as ever, and I know I speak for everyone at Penguin when I say we’re honored and thrilled to be publishing this book.”

Francesca Dow, Managing Director, Puffin UK, said, “We are excited and proud at Penguin in the UK to be publishing Eric Carle’s new book, with its wonderful art and timeless theme of friendship which readers of all ages will engage with”

Eric Carle (www.eric-carle.com) is acclaimed and beloved as the creator of brilliantly illustrated and innovatively designed picture books for very young children. His best-known work, The Very Hungry Caterpillar, has eaten its way into the hearts of literally millions of children all over the world and has been translated into 50 languages and sold over 30 million copies. Since the Caterpillar was published in 1969, Eric Carle has illustrated more than seventy books, many best sellers, most of which he also wrote, and more than 100 million copies of his books have sold around the world. In 2002, Eric and his wife Barbara opened The Eric Carle Museum of Picture Book Art (www.carlemuseum.org) in Amherst, MA, a 40,000 square foot space dedicated to inspiring a love of art among children by introducing them to picture book art by renowned artists from around the world. Eric Carle divides his time between the Florida Keys and the mountains of North Carolina.

Philomel Books was founded in the early 1980s from World Publishing Group for Young People. In its early days, with its mission to produce distinguished books that would stand the test of time, the imprint was home to what would become such industry classics as The Very Hungry Caterpillar by Eric Carle, Grandfather Twilight by Barbara Helen Berger, Pink and Say by Patricia Polacco, and the Caldecott Medal-winning titles Owl Moon by Jane Yolen and John Schoenherr, and Lon Po Po by Ed Young. Today, in addition to being the picture book home of contemporary luminaries Oliver Jeffers (Stuck; The Incredible Book Eating Boy) and Loren Long (Otis; The Little Engine that Could) the imprint is known equally for its groundbreaking books for boys. Among the series and authors that now call Philomel home include Brian Jacques’ Redwall saga, Anthony Horowitz’s Alex Rider Adventures, John Flanagan’s Ranger’s Apprentice series, and Mike Lupica’s sports fiction—all New York Times bestsellers. Home, as well, to the multi-award winning novels Between Shades of Gray and Mockingbird, Philomel, publishes nearly forty titles per year and retains its standards of excellence in everything it releases, producing nourishing books for young minds that grow.