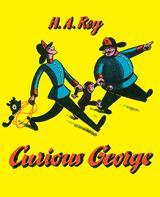 The new iBooks® Author format takes the beloved Curious George storybooks and activities and makes them available to a new generation of digital readers.  The interactive multi-touch format features embedded tools that allow children to enjoy an immersive reading experience by playing an active role in George’s adventures.

“We wanted to create a digital storybook that didn’t distract children from the narrative, but instead allowed them to help the story along by completing activities that are closely tied to the plot,” said Cheryl Toto, Senior Vice President of Strategy & Planning. “Whether it’s helping George add stickers to his thank-you cards or helping him find his way back to the man with the yellow hat, these widgets bring his adventures to life and pull children directly into the story.”

Special features include embedded slideshows and animation, touch-responsive puzzles, and comprehension activities.  After readers help George on his adventure, there are also related bonus activities to enjoy, including digital mazes, word puzzles and more.

Curious George Says Thank You and Curious George in the Big City are now available in the Apple® iBookstore ℠ priced at $3.99 for a limited time. Two new titles in the Curious George Multi-Touch Storybook and Activity Series will launch every month for the next six months.  Click here to view a sample on the iPad®.

Curious George was published by Houghton Mifflin in 1941 and for over seventy years he has been capturing the hearts and minds of readers young and old throughout the world. Books about Curious George, including the seven original stories by Margret and H. A. Rey, have sold over 75 million copies. So popular that his original story has never been out of print, George has become one of the most beloved and most recognizable characters from children’s literature. He has been featured in a Public Service Advertising literacy campaign in partnership with the Ad Council and the Library of Congress, and in 2012 Curious George was inducted into the Indie Choice Book Awards Picture Book Hall of Fame. In addition to the numerous books about his mischievous adventures and the bestselling digital apps, Curious George stars in the Emmy-winning PBS television series Curious George and has also starred in two full-length movies, Curious George and Follow that Monkey. For more information, visit www.curiousgeorge.com.