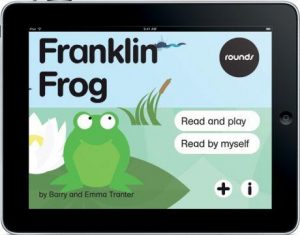 London, 8 August, 2012 – Independent publisher Nosy Crow is pleased to announce its first non-fiction book app for iPad, iPhone and iPod touch, Rounds: Franklin Frog, is now available on the App Store. Illustrated by Barry Tranter and written by Emma Tranter, this interactive, multimedia app is recommended for children ages 3 to 6.

Rounds: Franklin Frog is the first app in an innovative new series about the life-cycles of animals. Illustrated in a bold, graphic style, using only circles and divisions of circles, the story bears all the hallmarks of a Nosy Crow app – ingenious interactivity, original music, lively child narration and highlighted text – while also being educational and fun.

Children can participate in every stage of Franklin’s life, from birth to parenthood, and take part in all of the things that frogs do best, including hopping, swimming, eating, and laying frogspawn and, best of all, changing from a tadpole into a frog – and then they start all over again with Franklin’s son. The app is filled with fun facts about frogs (did you know that they chew food inside their mouths by squashing it between their tongue and their eyeballs?), carefully designed to inspire enthusiasm and teach young children about biology.

“Barry Tranter’s clean, clear and elegant artwork style seemed a perfect place to start,” says Kate Wilson, Managing Director of Nosy Crow. “To be able to make metamorphosis happen, for example, by tapping a screen rather than showing a sequence of images seemed a hugely exciting way to use Multi-touch technology. We are really proud of the way that we’ve blended learning and facts with play…. and of how we’ve blended all three with reading for pleasure, which is central to our philosophy.”

The Rounds: Franklin Frog App is available for an introductory price of $0.99 until Saturday, August 11 and for $4.99 onwards, from the App Store on iPhone, iPad and iPod touch or at www.itunes.com/appstore.

Visit the Media Kit on NosyCrow.com for videos, screenshots and additional resources.

Nosy Crow is a London-based children’s book and app publisher founded in 2010 by veterans of the children’s publishing industry working who brought on board experienced electronic games developers. It published 23 books/ebooks and three apps in 2011, and will publish 36 books/ebooks and nine apps in 2012. It was named Children’s Publisher of the Year at the 2012 Independent Publishing Awards. In the U.S. and Canada, the Nosy Crow imprint is published under the umbrella of Candlewick Press. In Australia and New Zealand, Nosy Crow partners with Allen and Unwin. Nosy Crow believes in encouraging children to read for pleasure, whatever reading material and whatever reading experience they choose.

In the UK: Tom Bonnick

In the US: Milena Schmidt