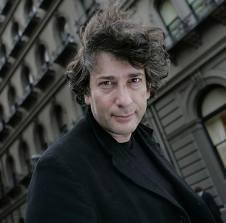 “We are thrilled to sign these wonderful and diverse books by the immensely talented Neil Gaiman, who is such a treasure and has so many fans of all ages,” says his editor, Rosemary Brosnan.

The two new picture books will center on Chu, the loveable little panda with the great big sneeze who stars in the forthcoming picture book Chu’s Day, illustrated by Adam Rex. Chu’s Day will be published on January 8, 2013. The Chu books were inspired by a visit Gaiman made to China. A hilarious young middle-grade novel titled Fortunately, the Milk will feature numerous interior illustrations by Skottie Young, and is an ode to the pleasure and wonders of storytelling itself.  Also included in the deal is a sequel to Odd and the Frost Giants, which will follow the Viking boy Odd on further adventures. In addition, Gaiman will write a middle grade novel, as yet untitled.

Neil Gaiman is the New York Times bestselling author of the novels Neverwhere, Stardust, American Gods, Anansi Boys (#1 NYT bestseller), and Good Omens (with Terry Pratchett); the Sandman series of graphic novels; and the short story collections Smoke and Mirrors and Fragile Things. He is also the author of books for readers of all ages including the #1 bestselling and Newbery Medal-winning novel The Graveyard Book, the bestselling novels Coraline and Odd and the Frost Giants; the short story collection M is for Magic and the picture books The Wolves in the Walls, The Day I Swapped my Dad for Two Goldfish, and Crazy Hair, illustrated by Dave McKean; The Dangerous Alphabet, illustrated by Gris Grimly; and Blueberry Girl, illustrated by Charles Vess. He is the winner of numerous literary honors, including the Hugo, Nebula, Bram Stoker, and World Fantasy Awards, the Newbery Medal, and the Carnegie Medal. Originally from England, he now lives in America. Visit him online at www.neilgaiman.com.