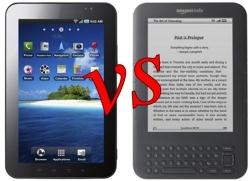 E-book consumers’ preference for tablets is accelerating rapidly as dedicated e-readers drop in popularity, according to the Book Industry Study Group (BISG)’s closely watched Consumer Attitudes Toward E-Book Reading survey. The second installment in Volume Three of the study shows that, over the course of just six months, consumers’ “first choice” preference for dedicated e-readers such as those from Amazon and Barnes & Noble declined from 72 percent to 58 percent. Tablet devices are now the most preferred reading device for more than 24 percent of e-book buyers, up from less than 13 percent in August 2011. Further, the increase in tablet preference was not primarily for Apple’s iPad (which rose by just over one percent), but for non-Apple tablets – overwhelmingly from Amazon and Barnes & Noble. These non-Apple devices increased from five percent to 14 percent over the same period.