Home > One Hundred Books Famous in…

One Hundred Books Famous in Children’s Literature: A Holiday Presentation at the Grolier Club 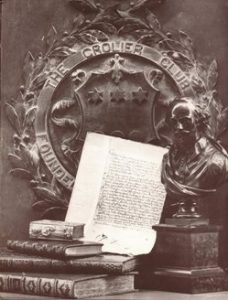 Powerful narrative, unforgettable characters, illustrations that stir the imagination, and insights that engage the mind and heart—literature for children is forged from the same enduring elements as literature for adults.  Children’s books with these qualities often shine for generations, with some achieving landmark fame.  A few such books ultimately go on to enter the canon of classics of children’s literature.

The Grolier Club’s milestone public exhibition, One Hundred Books Famous in Children’s Literature, showcases one hundred books of this caliber, printed from 1600 to 2000.  On view from December 10, 2014 through February 7, 2015, the show includes such beloved books as Robinson Crusoe, Grimm’s Fairy Tales, Alice’s Adventures in Wonderland, Tom Sawyer, Treasure Island, Peter Rabbit, The Wonderful Wizard of Oz, Peter Pan, Winnie-the-Pooh, Charlotte’s Web, The Cat in the Hat, Where the Wild Things Are, and Harry Potter.  These classics and others—many famous today, some only in their time—will bring smiles of enjoyment to adults and children alike.  The curator and children’s book authority Chris Loker has secured loans from major institutions, among them the American Antiquarian Society;  Beineike Rare Book & Manuscript Library, Yale University; Cotsen Children’s Library at Princeton University; Houghton Library, Harvard University; The Morgan Library & Museum; and distinguished private collections.

The books are organized according to key themes in children’s literature: Fairy Tales & Fables, Nursery Rhymes, Faith, Learning, Poetry, Girls & Boys, Animals, Fantasy, Adventure, Novelties, and Toys.  This arrangement allows viewers to see genres of literature for children from early forms of instructional and devotional primers to exuberant expressions of rhymes, stories, novels and picture books.  First or early editions are displayed wherever possible, some of them extremely rare.

The oldest book in the exhibition, Orbis Pictus, published in Nuremberg in 1658, is a schoolbook in simple encyclopedic form for young students of Latin (the text is in both Latin and German.)  Used for two centuries throughout Europe, it is an early effort at integrated text and pictures, and thus shows a pivotal step in the development of the illustrated book for children.  The New-England Primer is one of only two extant copies printed in 1727 (the earliest known surviving edition.)  In print for over 200 years, this was the first reader for many young Americans in the 18th and 19th centuries, and thus one of the most frequently read books in the United States.

Tommy Thumb’s Pretty Song Book (Vol. 2), published in London in 1744, is an exceptionally important book, although not well known today.  It is the first known collection of English nursery rhymes, gathering together the earliest recorded versions of ditties crooned to babies such as “Sing a Song of Sixpence,” “Hickory, Dickory, Dock” (here titled “The Mouse ran up ye clock”), “Mary Mary Quite Contrary,” “Baa Baa Black Sheep,” and “Cock Robin,” among others.

Songs of Innocence, written, illustrated and published by William Blake in London in 1789, contains his short lyric poems for children.  It is the third in Blake’s series of illuminated books—the earliest examples of artist’s books.  Created by this 18th century British visionary, poet, author, painter, illustrator, printer and engraver, this copy—one of fewer than forty copies made–has never been out of print, and is an artistic masterpiece.

Alice’s Adventures in Wonderland, written by Lewis Carroll [pseudonym for Charles Lutwidge Dodgson], illustrated by John Tenniel and published in London in 1865, is one from the first edition that the author withdrew and suppressed.  However, 50 copies from that edition had already been distributed, and today only a few more than 20 of those are known to reside in private or institutional collections. This particular copy is both unique and remarkable as Lewis Carroll edited it by hand in his trademark purple ink in preparation for his publication of The Nursery “Alice.”  An unprecedented work of fantasy, enriched with wordplay, nonsense verse and a deep vein of mathematical and logical puzzling, this book invites interpretations on multiple levels, and since publication has never ceased to fascinate children and adults around the world.

The first half of the 20th century saw the explosion of ground-breaking picture books that presented color-saturated illustrations entwined with enticing worlds: Velveteen Rabbit, Millions of Cats, The Story of Babar, Story of Ferdinand, Madeline, Curious George, Make Way for Ducklings, Le Petit Prince, Eloise, and perhaps the most colorful of all, Goodnight Moon.  In the second half of the 20th century there are equally glorious picture books that celebrate color, texture and message: The Snowy Day, Where the Wild Things Are and The Very Hungary Caterpillar.  Where the Wild Things Are, written and illustrated by Maurice Sendak, was published in New York in 1963.  A landmark artistic accomplishment, this picture book is beloved throughout the world by children for its vivid illustration and compelling story of Max, the boy who sails to an island inhabited by Wild Things.  Sendak’s integration of pictures and text widened the path for the modern author / illustrator.  His obituary in the New York Times described him as “widely considered [to be] the most important children’s book artist of the 20th century.”

Harry Potter and the Philosopher’s  Stone, by J. K. Rowling, published in London in 1997, is the most contemporary book in the exhibition.  The first of J. K. Rowling’s seven fantasy novels, it is a tale full of magical realism about three young friends at Hogwarts School of Witchcraft and Wizardry. This book is from the initial print run of just 300 copies, all of which went first to public libraries. In terms of fame, the Harry Potter books unleashed an unprecedented publishing phenomenon, and today have been printed in over 70 languages, making devoted readers out of millions of children and adults alike.

Displayed along with these one hundred books are over 50 historic artifacts that demonstrate the interrelationships between these famous books and the culture of their era, including original book art and illustration, autograph letters, manuscript drafts, antique toys, early dolls and games, antique horn books, ivory alphabet discs and other children’s objects, all of great interest in their own right.

One Hundred Books Famous in Children’s Literature is the sixth in the “Grolier Hundreds” series. The Grolier Club has previously organized only five such exhibitions in its 130-year history, focusing previously on English literature (1903), American literature (1946), science (1958), medicine (1994) and fine printed books (1999). These admired exhibitions have set the standard for book collecting and reading enjoyment in their fields, and the organizers expect no less from this new addition to the Grolier Hundred canon.

Maurice Sendak, famed author of Where The Wild Things Are, believed, “You cannot write for children. They’re much too complicated. You can only write books that are of interest to them.” This concept—that on its way to becoming famous a book needs first and foremost to be of interest to children—underlies the choice of books represented in this exhibition.  The Grolier Club believes that the books presented in this historic show will long remain a source of interest, and of joy and wonder, to children of all ages.

Accompanying the exhibition is a 320-page, hardbound catalogue with color photographs of all one hundred famous children’s books plus four scholarly essays, available for purchase at The Grolier Club and through Oak Knoll Books (http//www.oakknoll.com), exclusive distributors of Grolier Club publications.

A Colloquium “Journeys Through Bookland: Explorations in Children’s Literature” takes place Tuesday, January 20, 2015 from 1-5 pm, with a cocktail reception to follow. This colloquium brings together six children’s literary experts who will lead participants through highlights in the history, present, and future of the book for children.

The exhibition and catalogue have been made possible in part by the generous support of Bring Me A Book Foundation, Mountain View, California; Gladys Kreible Delmas Foundation, New York; Furthermore Grants in Publishing, A Program of the J. M. Kaplan Fund, New York; and Pine Tree Foundation of New York.

CURATOR’S PUBLIC TOURS OF THE EXHIBITION:

Curator Chris Loker is available for interviews and tours of the exhibition.

The Grolier Club, founded in 1884, is America’s oldest bibliophile society, with a mission to foster appreciation for the art, history and production of the book and graphic arts.

Admission: Exhibitions are open to the public free of charge