Home > GLBT Read Out at ALA…

GLBT Read Out at ALA Annual 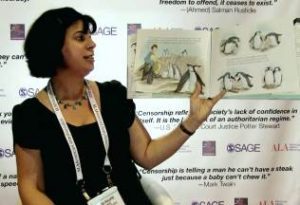 The Gay, Lesbian, Bisexual, and Transgender Round Table, SAGE Publishing, and the American Library Association’s Office for Intellectual Freedom invite you to the Banned Books Readout Booth on Saturday, June 25 and Sunday, June 26 as part of ALA Annual. This event will be held in honor of the victims of the recent massacre in Orlando, Florida.

Attendees will have the opportunity to read a brief passage from their favorite banned book — including LGBTQ titles — and to share why that book matters to them. Readings will be professionally recorded and featured on the Banned Books Week YouTube channel during Banned Books Week, September 25-October 1, 2016. The booth will be located at the entrance to the exhibit hall (look for a red carpet and cameras).

RSVP now to be placed on the “Fast Pass” list and jump to the front of the line!