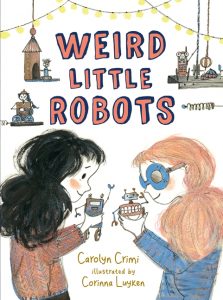 Eleven-year-old Penny Rose has just moved to a new town, and so far the robots she builds herself are her only company. But with just a bit of magic, everything changes: she becomes best friends with Lark, has the chance to join a secret science club, and discovers that her robots are alive. Penny Rose hardly remembers how lonely she used to feel. But then a fateful misstep forces her to choose between the best friend she’s always hoped for and the club she’s always dreamed of, and in the end it may be her beloved little robots that pay the price. Quirky and wonderful, this illustrated chapter book from Carolyn Crimi and Corinna Luyken shows that making your own space and a true friend in the world is a kind of magic all its own.

When two science-savvy girls create an entire robot world, they don’t expect the robots to come alive. But life may be a bit more magical than they thought.