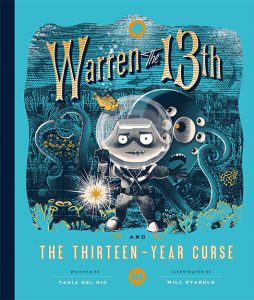 Warren the 13th and the Thirteen-Year Curse

Warren the 13th sets sail on his final adventure in this lushly illustrated middle grade series in the spirit of Edward Gorey and Lemony Snicket.

In this final story of Warren’s thrilling adventures, the young manager is adjusting to the demands of running a floating hotel and is planning his thirteenth birthday party. But then disaster strikes! The Warren Hotel is shipwrecked on a strange island, and Sketchy is kidnapped!

Warren and his crew of friends set off on a daring rescue mission across the high seas, where they meet a delightful new cast of characters that includes wizened pirates, a sea witch, and a talking clam. As Warren pursues his many-tentacled friend’s kidnappers, he will learn the truth of Sketchy’s mysterious origins—as well as one final secret of his beloved Warren Hotel.

Once again, readers can expect mesmerizing illustrations on every page, along with plenty of riddles, puzzles, and adventure galore!