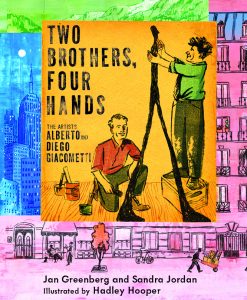 by Jan Greenberg and Sandra Jordan

The inspiring true story of the Giacometti brothers, one an artist, the other a daredevil, both devoted to their craft . . . but even more devoted to each other.

Everyone who knew them agreed. Alberto was the genius of the family. His younger brother Diego was his opposite–he didn’t care much for books or schoolwork, and he had no idea what he would be when he grew up. But despite their differences, the two brothers shared an intense bond.

Alberto Giacometti became one of the iconic artists of the twentieth century, whose tall, spindly sculptures grace the collections of museums around the world. Diego was always at his side, helping and encouraging, and in his spare time creating remarkable pieces of furniture, works of sculpture in their own right.