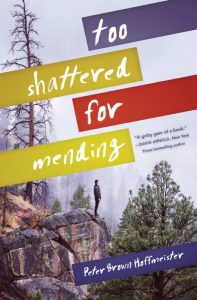 Too Shattered for Mending

“Little” McCardell is doing all he can just to keep it together after the disappearance of his grandfather “Big” and the arrest of his older brother, JT. He’s looking out for his younger cousin, trying to stay afloat in school, working in the town graveyard for extra cash, and in his spare time he’s pining after Rowan—the girl JT was dating until he got locked up. When the cops turn up asking questions about Big, Little doesn’t want to get involved in the investigation—he’s already got enough to deal with—but he has no choice. Especially not after the sherriff’s deputy catches him hunting deer out of season and threatens to prosecute unless he cooperates.

Soon Little finds himself drowning in secrets, beholden to the sheriff, to JT, to Rowan, and to Big’s memory, with no clear way out that doesn’t betray at least one of them. And when Little’s deepest secret is revealed, there’s no telling how it could shatter their lives.