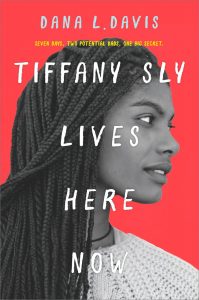 In the wake of her mother’s death, a teen girl has seven days to get to know the biological father she never knew—but what if he’s not actually her father?

16-year-old Tiffany Sly’s psyche was seriously damaged by the death of her mom. Now, she’s afraid just about anything and everything will lead to her imminent death. It doesn’t help that she’s being forced to leave Chicago behind to live with the biological father she’s never met before. And that the day before she’s set to leave for California, another man shows up at her door, claiming he could be her biological father too.

When Tiffany arrives in California, her suspicions are confirmed. There’s no way Anthony Stone is her biological father—with his blue eyes and light skin, she looks nothing like him. And the way he runs his household, with rules and curfews and dress codes, Tiffany isn’t sure what being his daughter might mean for her future.

When Tiffany meets the mysterious boy across the street, Marcus, who has experienced her greatest fear of all, death, she finds a real friend. And it is through their unlikely bond that Tiffany will find her way back to many of the things she lost when her mother died, including her sense of real family.