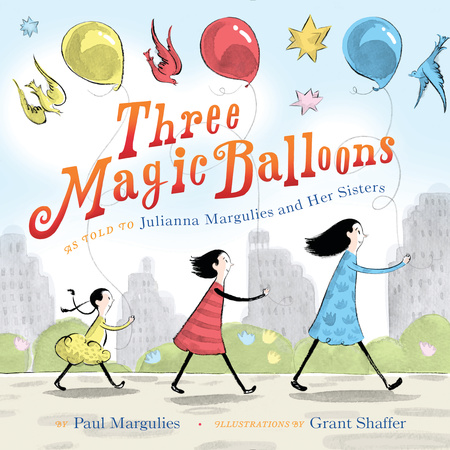 by Julianna Margulies and Paul Margulies

Julianna Margulies pays tribute to her late father by bringing his manuscript to life.

Saturdays at the zoo with their father always end the same way for Ariel, Miranda, and Jane: he offers them a treat, they choose instead to buy food for the animals. On this particular Saturday, a mysterious balloon man gives them a small reward for their kindness — one balloon each (a blue one for Ariel, a red one for Miranda, and a yellow one for Jane), to be tied to their bedposts that night. Soon they find that their simple acts and the balloon man’s simple reward bring them more magic than they could ever have imagined.

Julianna Margulies found the manuscript for Three Magic Balloons among her father’s papers after his death, and worked closely with her editor to adapt it for a picture book. She presents it now in his loving memory.