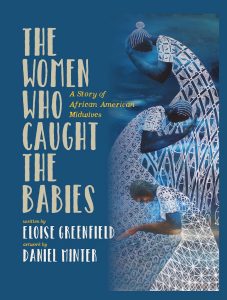 “Midwives have been in the world probably as long as there have been human babies on earth. With this book, though, I want to take you back only as far as the Africa of a few hundred years ago. That’s when millions of Africans were forced from their homelands, brought to America and enslaved. Some of the enslaved were midwives.”
– Eloise Greenfield

The Women Who Caught the Babies highlights important aspects of the training and work of African American midwives and the ways in which they have helped, and continue to help, so many families by “catching” their babies at birth. The blend of Eloise Greenfield’s poetry and Daniel Minter’s art evokes heartfelt appreciation of the abilities of African American midwives over the course of time.