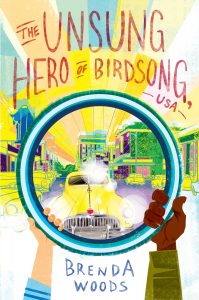 The Unsung Hero of Birdsong, USA

The Coretta Scott King Honor-winning author tells the moving story of the friendship between a young white boy and a Black WWII veteran who has recently returned to the unwelcoming Jim Crow South.
On Gabriel’s twelfth birthday, he gets a new bike–and is so excited that he accidentally rides it right into the path of a car. Fortunately, a Black man named Meriwether pushes him out of the way just in time, and fixes his damaged bike. As a thank you, Gabriel gets him a job at his dad’s auto shop. Gabriel’s dad hires him with some hesitation, however, anticipating trouble with the other mechanic, who makes no secret of his racist opinions.
Gabriel and Meriwether become friends, and Gabriel learns that Meriwether drove a tank in the Army’s all-Black 761st Tank Battalion in WWII. Meriwether is proud of his service, but has to keep it a secret because talking about it could be dangerous. Sadly, danger finds Meriwether, anyway, when his family receives a frightening threat. The South being the way it is, there’s no guarantee that the police will help–and Gabriel doesn’t know what will happen if Meriwether feels forced to take the law into his own hands.