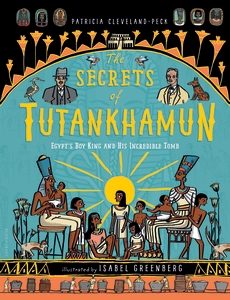 The Secrets of Tutankhamun

Tutankhamun was born in a time of change. His father, Atakhenaten, instituted broad political and religious reform to Egypt, and his laws were controversial. By the time Tut turned nine, his whole family had died and he was named the youngest king Egypt had ever had. His rule was short and tumultuous, and around age nineteen, Tut died. More than three thousand years later, Howard Carter, a British archaeologist with a penchant for ancient history and a special skill for excavation in Egypt’s Valley of the Kings, made a discovery that shocked the world: King Tut’s tomb, long ago assumed destroyed, not only survived but was fully intact. The treasures within gave a stunning and undisturbed perspective on ancient Egyptian culture and uncovered secrets that fascinated the world.

With comprehensive text and stunning illustrations from a New York Times bestselling illustrator, The Story of Tutankhamun is a compelling look at the life and legacy of the famed boy king.