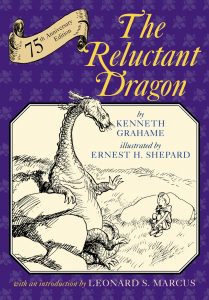 In this beloved classic story, a young boy befriends a poetry-loving dragon living in the Downs above his home. When the town-folk send for St. George to slay the dragon, the boy needs to come up with a clever plan to save his friend and convince the townsfolk to accept him. This story first appeared in Kenneth Grahame’s Dream Days and was first published as a separate book by Holiday House in 1938 with illustrations by Ernest H. Shepard.

Now celebrating its 75th anniversary with an illuminating introduction by Leonard S. Marcus, Kenneth Grahame’s classic tale of wit, courage, and compassion promises to enchant yet another generation of kindred spirits.