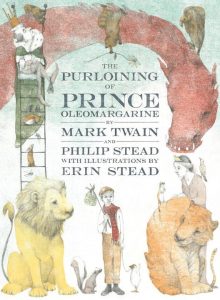 The Purloining of Prince Oleomargarine

The Purloining of Prince Oleomargarine began as a bedtime story Mark Twain told his daughters. View Twain’s notes from his original story here, which are housed at The Bancroft Library at the University of California, Berkeley.
A never-before-published, previously unfinished Mark Twain children’s story is brought to life by Caldecott Medal winners Philip Stead and Erin Stead.

In a hotel in Paris one evening in 1879, Mark Twain sat with his young daughters, who begged their father for a story. Twain began telling them the tale of Johnny, a poor boy in possession of some magical seeds. Later, Twain would jot down some rough notes about the story, but the tale was left unfinished… until now.
Plucked from the Mark Twain archive at the University of California at Berkeley, Twain’s notes now form the foundation of a fairy tale picked up over a century later. With only Twain’s fragmentary script and a story that stops partway as his guide, author Philip Stead has written a tale that imagines what might have been if Twain had fully realized this work.

Johnny, forlorn and alone except for his pet chicken, meets a kind woman who gives him seeds that change his fortune, allowing him to speak with animals and sending him on a quest to rescue a stolen prince. In the face of a bullying tyrant king, Johnny and his animal friends come to understand that generosity, empathy, and quiet courage are gifts more precious in this world than power and gold.
Illuminated by Erin Stead’s graceful, humorous, and achingly poignant artwork, this is a story that reaches through time and brings us a new book from America’s most legendary writer, envisioned by two of today’s most important names in children’s literature.