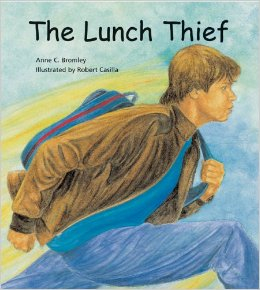 The Lunch Thief: A Story of Hunger, Homelessness and Friendship

Rafael is hungry because someone stole his lunch. His mom had packed his lunch bag with two burritos, a bag of corn chips, some carrots, and an apple. Once a week she tucks in a slice of her special lemon pound cake. Rafael saw Kevin, a new kid in his class, sneak his lunch bag from underneath his desk and tuck it in his backpack. But how can he do something about the theft without picking a fight? Inspired by his mother’s advice to use his mouth before his fists, Rafael bides his time, but other kids’ lunches are disappearing, too. On an errand with his mom, Rafael sees Kevin carrying a bundle of laundry into a motel room, and his mom tells him Kevin’s family might be one of the families who lost their homes in the recent wildfires. Rafael rethinks his anger. The next day, instead of accusing Kevin, Rafael invites him to share his lunch, letting him know he’s been caught, but offering friendship as well as a good meal.